Open and shut: The two worlds of the NCAA Tournament in Indianapolis 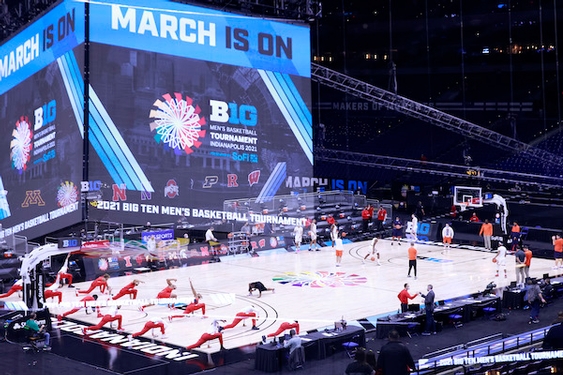 The Ohio State Buckeyes and Illinois Fighting Illini warm-up before the start of the Big Ten Basketball Tournament championship game at Lucas Oil Stadium on March 14, 2021, in Indianapolis, IN.

The three buses were traveling south on Interstate 65 at midnight Tuesday, returning from a late practice at Purdue’s Mackey Arena ahead of the NCAA Tournament that opens there Thursday. There were 34 people on them, total.

Five state trooper cars, lights whirring, surrounded them. The three in front took turns racing ahead and blocking on-ramps. The caravan of buses was in the middle of three lanes, and the two troopers in back flanked them in adjacent lanes, preventing anyone from passing — as if someone in a car going 70 mph with the windows rolled up on a 40-degree night could somehow transmit COVID-19 to the passengers inside the buses.

The buses arrived at the downtown Marriott hotel and unloaded their cargo of players, coaches and staff. They were escorted to their individual rooms on their own floor, where they are required to stay until their next practice (and electronic monitoring bracelets and security guards posted at the entrances will tell officials if they don’t).

“The only thing we’ve been doing is staying in our room and swabbing our nose every six hours, is what it feels like,” North Carolina coach Roy Williams said of his 36th NCAA Tournament. “It’s been difficult, guys. It hasn’t been nearly as much fun. … It hasn’t exactly been Maui.”

It’s not exactly Maui at Tiki Bob’s Cantina five blocks away on Meridian Street, either. There is no sand or waves, but there are people, lots of them, St. Patrick’s Day revelers in floppy green hats drinking green beer while not wearing green masks.

There’s already a line at 6 p.m. to get in Kilroy’s Bar N’ Grill. The patio at The District Tap is full. Taps & Dolls is packed, too. Indianapolis police dispatched two trailers of horses to make sure everyone behaves once the Indiana Pacers game finishes and even more people converge on the Georgia Street promenade.

Most teams are staying just down Maryland Street at the Marriott or the even larger JW Marriott next door. Stretched across the 34-floor curved front of the JW Marriott is a giant bracket with all 68 teams. “Indiana, where champions are crowned,” it says across the top.

It amounted to a surreal scene Wednesday night: Players confined to their rooms looking through the giant bracket and staring down at St. Paddy’s Day celebrations in a city where restaurants and bars are open at 75 percent capacity, the sound of pumping music and clinking glasses interrupted every few minutes by wailing sirens from another police escort of a three-bus caravan carrying no more than 12 people in each.

The two worlds collide Thursday, when games begin in the three-week tournament and fans can attend at up to 25 percent of an arena’s capacity. The players are tested daily and eat meals in their rooms and wear contact tracing bracelets and can’t leave their hotel floors. Everyone else? Welcome basketball fans.

“Our positivity rate in the state of Indiana is down below 3 percent locally,” Dan Gavitt, the NCAA senior vice president of basketball, said Wednesday. “We made a very informed and careful decision that took weeks, in consultation with local health authorities, about whether we should have fans in attendance or not. Had things not improved significantly in our nation and locally here over the last several weeks and months, I don’t know that we would be having fans.

“But the opportunity was what our membership wanted and what local health officials were comfortable with. Ultimately, it’s up to fans whether they want to attend or not.”

As Indiana has relaxed restrictions, though, the NCAA has done the opposite with an age demographic that statistically is among the least vulnerable to the virus. Sixth-seeded San Diego State, which opens Friday against Syracuse at Hinkle Fieldhouse, operated under some of the most stringent COVID-19 protocols all season in one of the most locked-down states and hasn’t had a positive case since September. This is a whole, other level.

Teams were required to have seven straight days of negative tests before their maximum 34-person travel party could spread out across a 150-seat 737 charter jet for the flight to Indianapolis. They were immediately tested and received red wristbands, indicating they hadn’t been cleared and were restricted to their floors.

The next day, they were tested again, got blue wristbands and were sent back to their rooms.

Only when those tests returned negative were they granted official credentials and permission to take the skywalk to the convention center across the street for practice. But they are required to wear a domino-sized tracking chip that monitors their movements and blinks red if they get within 6 feet of another person. If someone tests positive, the chips determine who was within close proximity and is a candidate for contact tracing quarantine.

Gavitt said Wednesday there have been 6,900 tests conducted so far, and only seven positives.

One of those, presumably, was from the group of six referees who arrived Sunday night in Indianapolis and — their version — said they were allowed to go to dinner at a local steak house because their hotel rooms weren’t ready. When one tested positive, the other five were sent home as well even though at least two claim they already had the virus earlier in the season.

Word circulated that a prominent coach who is particularly fond of restaurants made a reservation at St. Elmo, another of Indy’s steak houses, only to be told by NCAA staff that he couldn’t leave the hotel. He already had the virus and the vaccine, he explained. Doesn’t matter. Still can’t leave.

The NCAA is providing individually packaged meals in the hotels that are left outside the rooms. There have been growing complaints about the culinary fare, and some teams have opted for online food deliveries that must be received by a tournament “ambassador” assigned to each team. One team put in an order from Pizza Hut, an NCAA sponsor, the night before, only to learn the following afternoon it ran out of pizzas.

“An enormous number of deliveries,” Gavitt said. “We know that this is true also because, frankly, the trash that has been accumulating on each of the team floors has been enormous with all the takeout packages.”

Some deliveries, he said, have been arriving as late as 3 a.m. A few are for clothes (one SDSU staffer said he sent out shirts for dry cleaning and they were returned in the same bag, still dirty). One from Amazon was for Wiffle ball equipment.

Gavitt was asked if they would consider relaxing the protocols. He said no.

“We’re running a tournament to determine a national champion,” Gavitt said. “I’m very confident that every student-athlete in this competition and every coach wants a chance to play their game and determine who the better team is on the court. The only way to get that opportunity is to have an environment where everyone is tested, (where) the risk mitigation is in place so you don’t have a positive test or contact tracing that could knock out an entire team like we saw regularly during the regular season.

“So, I’ve got no reservations at all about the plan here to give us the best opportunity to play games successfully.”

There’s another reason: $1 billion. That’s the take from ticket sales and (mostly) the television contract, which represents about 85 percent of the NCAA’s annual revenue and is redistributed to schools each spring. Last year, after the tournament was canceled, the payout was only $225 million.

So players must stay inside the “controlled environment” of four hotels, using the skywalks connected to the convention center that has a temporary practice floor and weight rooms while St. Paddy’s Day festivities rage on at Tiki Bob’s. Parents can sit in the rafters and watch their sons play but can’t give them a hug or take them to dinner. SDSU coach Brian Dutcher talks about doing laundry in his bathroom sink.

“It kind of makes it a mental game,” Aztecs senior Matt Mitchell said. “It challenges you to stay in it mentally and not falter. If one guy falters mentally, it may be to the detriment of the whole team. Staying together at this time, in this bubble, in this tournament, could be the biggest thing for teams.”

The Aztecs were finally able to step outside for the first time since arriving Sunday afternoon, given a one-hour time slot Wednesday across the street at Victory Field, home of Indianapolis’ Triple-A baseball team. They played badminton, tossed a football, kicked a soccer ball, just gulped in the fresh air.

Later in the day, they separated into three buses and had their police escort for the six-mile drive to Hinkle Fieldhouse for practice. Dutcher is usually in a rush to finish and return to the hotel. Wednesday, he dragged out practice as long as possible, knowing Thursday’s workout is back at the convention center, knowing 20-year-old college students probably aren’t interested in doing the 500-piece puzzle or reading the 352-page book that were in their NCAA goodie bags.

“We’re trying to do a good job of not letting them lie in the rooms all day,” Dutcher said, “to give them some kind of activity where they feel like they’re accomplishing something during the day even though they can’t leave the hotel.

“I said to the team, ‘Maybe the best team’s not going to win this event. Maybe it’s the team most able to deal with quarantine and bubble life.’”