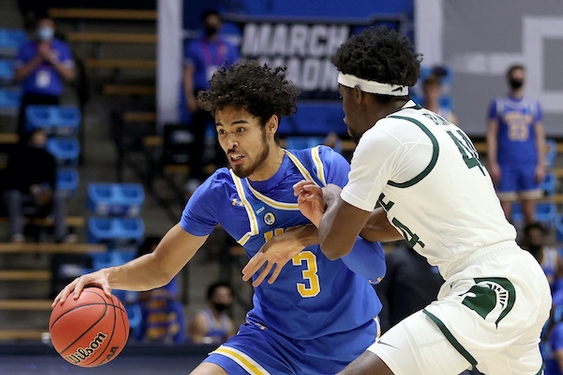 UCLA's Johnny Juzang (3) drives against Michigan State's Gabe Brown (44) during the first half in the NCAA Tournament First Four game at Mackey Arena in West Lafayette, Indiana, on Thursday, March 18.

It was a strange twist, UCLA experiencing the opposite of what it had endured over the previous 21/2 weeks.

Once trailing Michigan State by as many as 14 points in the first half and by 11 points at halftime, the Bruins forced overtime, appearing as if they just might extend their first appearance in an NCAA tournament in three years.

They did just that, a loud eight-clap breaking out high inside Mackey Arena after the Bruins prevailed for an unlikely 86-80 victory in the First Four game that came courtesy of making the kinds of plays they couldn’t during a rash of recent collapses.

Bruins players stood with arms draped over each other’s shoulders in the final seconds, swaying back and forth in celebration of their first NCAA tournament triumph since 2017. It didn’t even matter that Jules Bernard missed two late free throws after the Bruins had dominated the extra period.

UCLA (18-9) will play sixth-seeded Brigham Young on Saturday at Hinkle Fieldhouse in Indianapolis in the first round. It’s the start of what the Bruins hope will be three games in five days that would be needed to reach a regional semifinal.

Back-to-back baskets by UCLA’s Johnny Juzang gave the Bruins a four-point lead to start the overtime and sparked audible unease from a crowd that leaned heavily in the Spartans’ favor.

The Spartans later got the ball back down by three points before Aaron Henry lost a pass out of bounds along the baseline. UCLA’s Cody Riley powered in for a two-handed dunk, extending the Bruins’ advantage to five points, before the Spartans countered with a basket that proved especially costly when Juzang went down hard along the baseline and had to be helped off the court in extreme anguish.

UCLA had gone ahead by a point on a spinning layup by Bernard with 5 minutes 48 seconds left in regulation before the familiar letdown came back to bite the Bruins harder than ever. The Spartans scored the next seven points, seemingly taking control of the First Four game inside Mackey Arena, before Jaime Jaquez Jr. fully wrested control back.

The sophomore guard carried his team after a horrid start, rising for three-pointers and fighting for rebounds. His biggest rebound came on his own missed free throw, Jaquez later getting fouled on a layup with 28.7 seconds left. He made the resulting free throw to tie the score at 77-77.