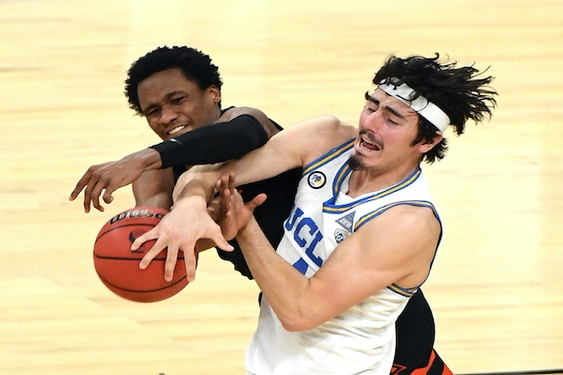 Oregon State's Gianni Hunt fouls UCLA's Jaime Jaquez Jr. (4) as they go after a loose ball during the quarterfinals of the Pac-12 Tournament in Las Vegas on March 11, 2021. (Ethan Miller/Getty Images)

The magic stretched deep into the night, accompanying UCLA from a comeback win completed on John R. Wooden Drive after midnight through a 75-minute journey into the heart of Hoosier basketball country.

At the end of a trip taken on three buses so that players could space out to ensure their safety amid a pandemic, the Bruins gathered in their hotel lobby around a giant NCAA tournament bracket.

Senior guard Chris Smith, accompanying his teammates despite having been lost for the season with a knee injury, was given the honor of affixing a white sticker reading “UCLA” onto the line opposite Brigham Young in the first round of the East Region.

“Yeeeeaaaahhhh!” the players cheered with gusto, nobody caring that it was 3:05 a.m. Eastern Daylight Time.

After gutting his way through all 45 minutes of the First Four game to score a career-high 27 points in the 86-80 overtime triumph over Michigan State, guard Jaime Jaquez Jr. fielded a congratulatory text message from Lorenzo Mata-Real, himself once a fearless Bruin.

“Yeah, I got a lot of love and support after that game,” Jaquez said after finally enjoying a few hours of sleep.

It was madness the Bruins could fully endorse after a March that had been filled with heartache. It also stirred the soul of fans who had been deprived of their NCAA tournament fix when the event was canceled a year ago, UCLA’s epic rally inside Mackey Arena generating a record average of 3 million viewers for this round on TBS.

“It was the best First Four game in history,” coach Mick Cronin said after his first NCAA tournament victory with the Bruins.

UCLA’s tour of historic Indiana basketball venues now moves to Hinkle Fieldhouse, home of the climactic scene in the basketball movie “Hoosiers.” Coach Norman Dale’s tape measure won’t be needed to gauge how much Jaquez and the 11th-seeded Bruins (18-9) want to sustain what they hope will become a fairy-tale run against the sixth-seeded Cougars (20-6) on Saturday night.

“I’m definitely prepared to play all 40 minutes if necessary, 45, whatever it takes to win,” Jaquez said.

The Bruins spent Friday assessing which body parts were sorest and what to do about them. Cronin said he was hopeful that sophomore guard Johnny Juzang could play Saturday after having been carried off the court with a sprained right ankle in overtime against the Spartans. In a promising sign, Juzang was able to hobble around in celebration with his teammates after they rallied from five points down in the final 11/2 minutes of regulation.

Given that the Bruins were confined to one floor of their hotel equipped only with showers, the team tried to assemble a makeshift cold tub for Jaquez to soak his weary limbs.

“We got to check some old ‘Animal House’ videos, some way maybe to try to somehow turn something into a cold tub so we can get Jaime an ice bath,” Cronin said. “Maybe we get a big garbage can that he can sit and take it up there or something. And I’m being serious, by the way. It’s funny, but I am being serious.”

If nothing else, the victory over the Spartans soothed a psyche that had been wounded by four consecutive defeats entering the NCAA tournament, all via second-half collapses. Cronin told his team that it had to be the aggressor after falling behind by as many as 14 points in the first half and 11 at the game’s midpoint.

They were more pugnacious in the end, Jaquez rebounding his missed free throw and converting an old-fashioned three-point play to tie the score near the end of regulation. Before Jules Bernard inbounded the ball for Juzang’s half-court shot that was off the mark, sending the game into overtime, Cronin delivered a confidence-building mandate: Don’t throw the ball away because we’re going to win the game.

“I was just trying to be a psychologist,” Cronin said, “but I believed it.”

It will likely take a stronger start-to-finish effort to beat Brigham Young, a steady, veteran-laden team that nearly knocked off top-seeded Gonzaga in the West Coast Conference tournament championship. Three of the Cougars’ losses came to the Bulldogs, and they also suffered a 26-point defeat against USC in early December.

UCLA won’t need any more lengthy bus rides after making it to the NCAA tournament’s central hub. Everything is now within walking distance, more magic within the Bruins’ grasp.

“The job’s not finished,” Jaquez said. “We’ve got more games to play, more experiences to have.”