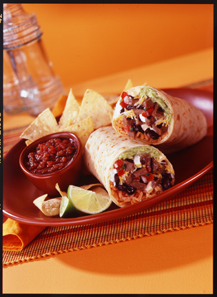 There are few foods that represent Southern California as well as the burrito. Not only is it a byproduct of the area's rich Mexican heritage, but it truly fits into the fabric of the region. You can hold your burrito while you're driving on the 405, while talking on your cell phone or drying your nails.

While everyone has their favorite burrito place, most of these establishments are only found in one part of town. Therefore, I chose to skip such places that consider themselves too good to cater to the masses, and instead decided to spotlight the fast-food restaurants that are accessible no matter which part of the Southland you reside in.

Baja Fresh and La Salsa were excluded for just being kind of boring, Viva Fresh didn't have enough locations and Taco Bell was eliminated due to gastrointestinal distress.

Have you ever wanted to be named DayQuan? How about something exotic yet dangerous such as Jacques? Maybe dabble in the gender-bending world of Bubbles? Well, live out all of your fantasy identities without the expense and time of therapy at your nearest Rubio's.

At Rubio's they offer much more than the standard “order number 109 is ready.” Here they call you by name – not necessarily your name but rather whatever name you tell them. As a side note, it's wise to pay with cash if you're going to get creative with your name. It's always an awkward moment when you tell the cashier that your name is “Gandar the Magnificent” while your credit card says “Francis.”

As a second side note, if your name is something girly like Francis (and you're not a girl), then it is that much more important that you come up with an extra-manly name for the cashier to bellow. Possibly something like “Butch” or “Lance.”

The Especial Burrito™ is the best burrito I've come across, with grilled carne asada or chicken, beans, rice, sour cream, salsa and a mysterious white sauce. The sauce is recognizable to a true fast-food connoisseur as a creamy rendition somewhere along the lines of a chipotle batter. It does a tremendous job keeping the burritos moist and tasty and adds a spectacular number of calories to your meal.

Once you become an advanced Rubio's diner you'll discover the virtues of alternating salsas in order to keep your taste buds guessing and your stomach craving Rubio's night after night.

After extensive research, it has been determined that El Pollo Loco is Spanish for “The Crazy Chicken.” While crazy chicken disease has not garnered national headlines like the mad bovine version, it certainly should have due to the amazing burritos churned out by this tasty poultry establishment.

The BRC burrito provides quite an obstacle for those still learning the alphabet, unless the diner is already aware that it is merely an abbreviation for the basic filling of beans, rice and cheese. The Classic Chicken Burrito ® is simply the BRC with chicken in it, but apparently naming it the CBRC did not go over well with their market research groups.

The upper echelon of El Pollo Loco burritos begins with the modestly named Ultimate. With its bountiful chunks of white meat chicken, the Ultimate Grilled Burrito has long been the gold standard of burritos. However, just as rappers have relegated gold to third place on their list of desirable jewelry materials behind platinum and diamonds, the Ultimate has fallen prey to the heavenly concoctions known as the Twice Grilled and the Grilled Fiesta.

The Grilled Fiesta Burrito ™ is quite literally a party in your mouth, although not the kind you might accidentally click on while checking football scores on the Internet. Those are bad and require a credit card. The burrito is great, has the daring ingredients of tortilla strips and corn and does not require a credit card.

The Twice Grilled Burrito ™ is the result of the kind of genius that only comes around every few centuries. In the footsteps of the first person who squeezed the udders on a cow in pursuit of milk is the great mind at El Pollo Loco who decided to grill a burrito a second time.

Of course it may have been a momentary stroke of idiocy by someone who thought that an already grilled burrito had not been grilled yet. I'd rather think of it as genius. Just like the invention of the squeegee.

The antithesis of El Pollo Loco's myriad chicken options is Chipotle's burrito. The emphasis being on burrito in the singular form, as they offer only one true burrito. For the record, they also have a fajita burrito but this is about burritos, not hybrids. I'm sure some people love fajita burritos just as some people love the Toyota Prius, but they're crazy, so their opinion really doesn't matter.

The Chipotle burrito contains cilantro-lime rice, beans, salsa of varying degrees of mildness, cheese or sour cream (apparently there's a one dairy product per burrito limit) and the meat of your choice. There also is a vegetarian option but I'm a human, not a stegosaurus, so I eat meat. Chipotle's meat options include chicken, carnitas and two varieties of the food formerly known as cow.

Part of the beauty of Chipotle is that you can get a remarkably good assembly line burrito. They have the kind of teamwork most college basketball coaches could only dream about. There's the tortilla lady, the rice girl, the bean guy, the meat person and the girl in charge of accoutrements such as cheese and sour cream. While “meat person” may not be resume material, such division of labor sure speeds up the ordering to eating process.

The one huge drawback to Chipotle is that the chain is owned by McDonald's. The good news is that they serve margaritas in little plastic cups. After a few of these you may be able forget about Ronald McDonald being the mastermind behind the cilantro-lime rice. That's the sort of thing that could ruin an otherwise savory dining experience. Another margarita, please!