USC is looking to tower over Drake in NCAA tournament 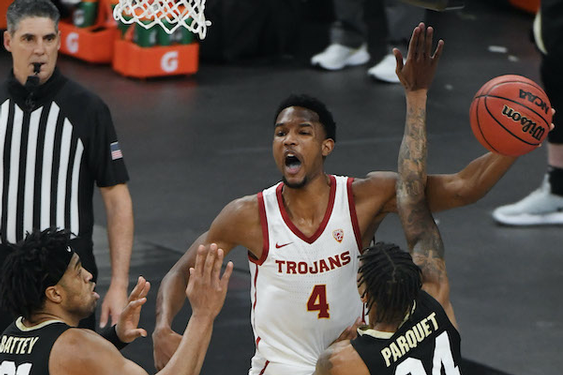 Its top forward broke his foot in early February. Its top guard broke his foot less than two weeks later. Still, after opening the season on an 18-game winning streak and fighting its way into the NCAA tournament field, Drake stood tall on Thursday in a stirring First Four comeback victory over Wichita State.

Now, it has to stand up to the nation’s tallest team Saturday in a West Region first-round game in Indianapolis.

No team in the tournament has more length than USC, and for the far more diminutive No. 11 seed Bulldogs, who rank 292nd in the nation in average height, that size is of sizable concern.

“USC is very impressive on film,” Drake coach Darin Devries said Friday. “Great length which helps them at both ends of the floor. They present a lot of challenges for us because of that overall size.”

That size advantage starts with the star 7-footer in the middle. Evan Mobley came alive over two games in the Pac-12 tournament, scoring 52 points, grabbing 18 rebounds and blocking 10 shots.

Devries acknowledged that Drake’s frontcourt hasn’t faced anyone this season like Mobley, who’s expected to be a top-three draft pick in the upcoming NBA draft. For a Drake team that relies on getting to the basket, scoring nearly 59% of its points inside the arc, the gangly freshman’s imposing presence on defense could be the real difference maker.

Drake does boast a 6-10 center in Darnell Brodie, who hit the turnaround jumper that clinched the win over Wichita State on Thursday. But while Brodie is excellent on the boards, ranking 11th in the nation in defensive rebounding rate, he’ll need some extra help to slow down Mobley.

There’s no mistaking who will be at the center of both team’s game plans.

“He’s had a tremendous year for us,” USC coach Andy Enfield said of Mobley. “When he’s struggled our team has struggled. When he plays well, our team has usually been very good. That’s how important he is to our success.”

The same was true of point guard Roman Penn over the course of the Bulldogs’ 18-0 start. Since he injured his foot, Drake (26-4) has had to rely heavily on guard Joseph Yesufu, who’s risen to the challenge, averaging 23 points over his last eight games.

Yesufu was fearless against Wichita State, leading the team with 21 points. But even he expressed some concern over USC’s size on the defensive end.

“They’re all very long,” Yesufu said. “A 7-footer. Six-10. That length makes their defense good. We just have to find a way to wear them out with our speed.”

Drake does have one thing USC (22-7) doesn’t. While the Bulldogs just earned their first NCAA tournament victory in 50 years, they’ll still have more tournament experience than USC when the teams tip off at Bankers Life Fieldhouse.

“Our entire team has a severe lack of tournament experience,” Enfield said. “But as a basketball player, you adjust pretty quickly. I think our guys are just excited for this opportunity. I don’t think the moment is too big for our team. I think we’re very confident.”