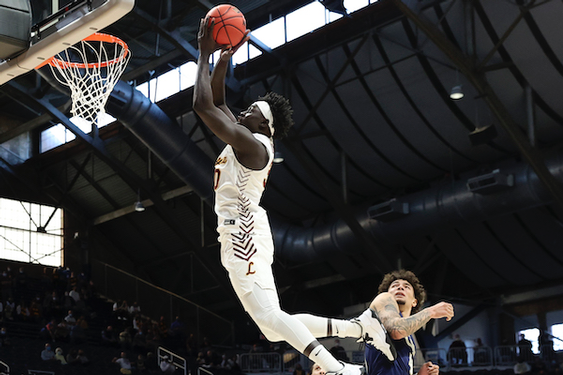 Loyola's Aher Uguak soars to the rim during the second half against Georgia Tech in the first round of the NCAA Tournament at Hinkle Fieldhouse in Indianapolis on Friday, March 19, 2021.

Loyola Chicago wasn’t going to make things easy for its fans against Georgia Tech, but in the end Sister Jean Dolores Schmidt was breathing easy from her seat in the balcony of Hinkle Fieldhouse.

After a sluggish start in their return to the NCAA Tournament, the Ramblers looked like their old selves again in a wild 71-60 win over the Yellow Jackets.

Lucas Williamson took control with 21 points on 8-of-13 shooting, and Braden Norris ran the offense like a tournament veteran, dishing out eight assists while scoring 16 points.

The Ramblers (25-4) will meet top-seeded Illinois on Sunday in the teams’ first matchup in the NCAA Tournament since the Mideast Regional in 1963, when Loyola won, 79-64, to advance to the Final Four en route to the national championship.

The big question before the game was how Georgia Tech would react without its leader, Moses Wright, the ACC Player of the Year. The Yellow Jackets started with a smaller lineup, inserting 5-10 guard Bubba Parham and putting 6-7 Khalid Moore on center Cameron Krutwig.

Georgia Tech used a stifling defense early to make Loyola virtually abandon its inside game. After Williamson’s 3-pointer gave Loyola its first lead one minute in, George Tech reeled off 11 straight points for a 13-3 lead, denying Krutwig the ball in the low post.

But after missing six of its first seven shots, the Ramblers woke up on Norris’ 3-pointer, and Krutwig finally made his first attempt 7 1/2 minutes into the first half.

That seemed to do the trick. Loyola finally took back the lead on a Krutwig lay-in with 2:42 left in the half and went into the locker room leading 30-25, finally looking like the team that was rightfully miffed over its No. 8 seeding.

Georgia Tech (17-9) took the lead back at the 13:30 mark on a 3-pointer by Jose Alvarado, who wore Wright’s No. 5. But Williamson answered with a 3, and the Ramblers took over down the stretch.

Loyola outrebounded Georgia Tech 30-17, including a 13-1 edge on the offensive boards.

Now comes the matchup everyone was waiting for, with the whole state watching.