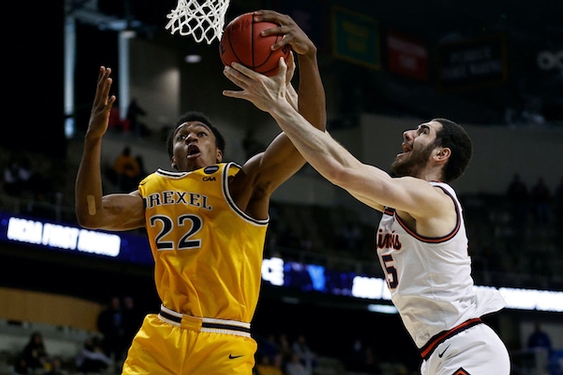 Amari Williams #22 of the Drexel Dragons and Giorgi Bezhanishvili #15 of the Illinois Fighting Illini battle for a rebound in the second half of the first round game of the 2021 NCAA Men's Basketball.

The upbeat pep bands blaring when teams need a lift. Acrobatic cheerleaders flipping across the court during timeouts. Crowds roaring so loud it overwhelms the senses.

None of that pomp is at the NCAA Tournament this year, of course.

The atmosphere at Indiana Farmers Coliseum, with only 1,200 fans Friday afternoon because of COVID-19 restrictions, made the first-round game between No. 1 seed Illinois and No. 16 Drexel feel a little like an exhibition game.

So did the way the Illini played. They rolled to a 78-49 victory in their first NCAA Tournament game since 2013.

Of course, nothing other than a victory mattered to Illinois.

“You’re used to running out in front of packed houses,” coach Brad Underwood said. “That’s different. We’re grateful there are fans, we had a lot of (Illinois fans). Once the ball’s thrown up, the game is the game. I’m just ecstatic we’re playing. There’s going to be a champion.”

The Illini expect that to be them.

The victory, however expected, was meaningful to fans, from Champaign natives to Chicago alumni.

“It’s nice to get back here where we belong,” Underwood said.

No. 2 seed Ohio State suffered a stunning loss to No. 15 Oral Roberts in the first round Friday, and No. 11 seed Michigan State melted down in an overtime loss to UCLA in a First Four game Thursday. The Illini played like the Big Ten’s best hope for a title, looking effortless as they executed exactly as expected.

The 29-point victory tied the second-largest margin of victory in an NCAA Tournament game for the Illini, dating to a first-round win against San Diego State in 2002.

Illinois (24-6) simply went about its business. As the Illini have continued to peak during this eight-game winning streak, each player has embraced his role.

“The one thing that we’ve talked about in the last few days is you can’t get to two without one in terms of victories,” Underwood said. “If you’re not dialed in and you’re not on point with your execution, with your game plan, you go home.

“We’ve had that mindset here in the last three weeks to a month. It’s been good for us. It has to continue. They only get harder from here.”

Illinois will face Loyola Chicago (25-4) in the second round Sunday in Indianapolis, where the entire tournament is being played for the first time in an effort to curb the spread of COVID-19.

Illinois started sluggishly Friday, shooting just 1 of 6 as Drexel made 3-pointers and outhustled the Illini on the boards. Illinois soon found the accelerator, shooting 57.1% for the game with four players scoring in double figures.

“I don’t think we were nervous,” center Kofi Cockburn said. “We have a lot of alphas and dudes that are confident and who know what they’re doing.”

Drexel players won’t soon forget their afternoon against Cockburn, who scored a game-high 18 points with multiple dunks and two blocks, or Ayo Dosunmu, who added 17 points, 11 rebounds and six assists.

“You can’t just load up with Ayo or load up with Kofi,” Underwood said. “Da’Monte (Williams) is one of the greatest 3-point shooters in America. Jake (Grandison) is such an explosive offensive player. You throw in Adam (Miller) and Trent (Frazier), all of a sudden it becomes a pretty balanced attack.”

Illinois credited its defense for sparking the offense. The Dragons shot just 30.6%.

Drexel (12-8) made the tournament for the first time in 25 years after winning the Colonial Athletic Association Tournament but was no match for the Illini.

As they left the court, Illinois players soaked in the win.

Point guard Andre Curbelo blew kisses into the stands, and Frazier whipped a towel in celebration. Underwood pointed to the fans in appreciation, and Dosunmu high-fived athletic director Josh Whitman before heading to the locker room.

“We worked hard for this moment,” Cockburn said. “It was just about enjoying the moment, enjoying being there and enjoying playing together and achieving a common goal. It was a really good experience for me and everybody else.”