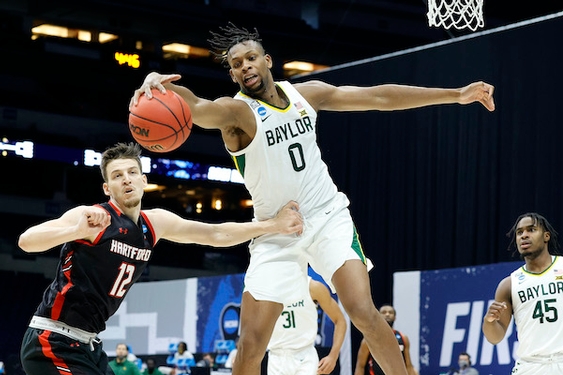 Hartford coach John Gallagher said if his team did certain things, they could hang around and anything would be possible in the Hawks’ first-ever NCAA Tournament game against top-seeded Baylor.

Hartford did certain things and did hang around, but it only lasted the first part of the first half.

Baylor, ranked No. 2 in the country for most of the season, was just too good defensively, forced some first-half turnovers, got some offensive momentum and defeated the Hawks, 79-55, Friday afternoon at Lucas Oil Stadium in Indianapolis.

“You got to give Baylor credit,” Gallagher said. “They’re a national championship contender for a reason. I watched 11 games of them. They present problems in a lot of areas - their length, their size, their shooting ability. They’re probably one or two of the best teams in the country.”

Key to the game

For the Hawks, it was really all about keeping the pace slow. They managed to do that in the first part of the first half as solid defense kept them in the game and they led 14-13 with about eight minutes left in the half. But the Hawks started to have trouble with Baylor’s aggressive defense and started to turn the ball over, something they could ill afford to do against one of the best defensive teams in the country, and the Bears took off from there.

Baylor had a little momentum going with four minutes left in the first half until Traci Carter’s 3-pointer cut the lead to 24-20. But the Bears then proceeded to end the first half with a 13-1 run and led 37-20 at halftime.

Play of the game

Hartford’s PJ Henry stole the ball, drew the foul and then Baylor’s Mark Vital got a technical foul and fouled out. Hartford hit four free throws and trailed 43-30 with 14:19 left.

Player of the game

For Hartford, it was certainly the first half of the first half. The Hawks lost starter D.J. Mitchell on the first play of the game when he went up to take a 3-point shot and landed awkwardly on his ankle. Henry stepped right in off the bench and scored four points. Baylor was struggling to shoot and the Hawks were hanging around and took a short-lived one-point lead before the game simply got away from them.

Stat of the game

Too many Hartford turnovers (13 in the first half, 24 for the game) combined with the Hawks’ struggle to hit shots in the first half (8 for 27 from the field, 29.6%) gave all the momentum to Baylor going into halftime.