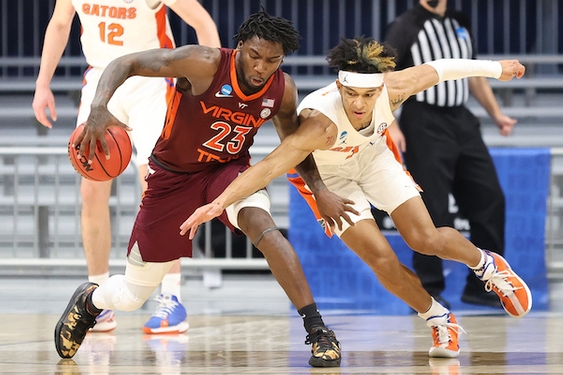 Virginia Tech's Tyrece Radford (23) comes under pressure from Florida's Tre Mann, right, in the second half during the first round of the NCAA Tournament

The Florida Gators, short-handed pretty much all season, were running out of options down the stretch Friday against Virginia Tech.

Starting point guard Tyree Appleby was sitting out after receiving stitches, top reserve Omar Payne was serving a suspension and two other Gators had fouled out. Meanwhile, star player Keyontae Johnson, out since his Dec. 12 collapse at Florida State, cheered his teammates from the sideline.

But the 1-2 punch of Colin Castleton and Tre Mann proved to be enough to carry the seventh-seeded Gators to a 75-70 overtime win Friday against No. 10 seed Virginia Tech and into the second round of the NCAA Tournament.

“We weren’t losing the game,” Castleton said. “That’s just what it came down to. We don’t want to go to Florida just yet.”

Castleton made an early case for South Region MVP.

Shaking off his recent struggles, Castleton played with a renewed edge and carried the Gators much of the day at Indianapolis’ famed Hinkle Fieldhouse. The 6-foot-11 redshirt junior finished with 19 points, 14 rebounds, three blocked shots and two assists, a robust linescore matched in NCAA Tournament play by just six players in the past 25 years, including Tim Duncan, Kevin Love and Zion Williamson.

“If Colin doesn’t step up like he does, obviously we’re going home,” Gators coach Mike White said. “I saw a different player than we’ve seen the last couple weeks.”

Mann, an All-SEC performer and UF’s leading scorer, had a relatively quiet day, given that he entered Friday riding a four-game stretch with 94 points. But on a day when the Gators shot 56.5% from the field, the 6-foot-5 sophomore from Gainesville iced the thrilling come-from-behind win against the Hokies (15-8) with a step-back 3-pointer with 23 seconds remaining in overtime and finished with 14 points.

“We were great down the stretch,” White said.

The victory moved the Gators to 4-0 under White during first-round NCAA Tournament games and positioned UF to advance to the Sweet 16 for the first time since 2017.

But White’s squad started slowly Friday and appeared headed for an early exit from the Big Dance.

The Gators fell behind 22-11 with nine minutes left in the first half until going on a 12-3 run featuring a 3-pointer, driving layup and steal by Scottie Lewis, plus three baskets from Mann to cut Virginia Tech’s lead to 24-23.

UF then found itself down 44-36 with about 13 minutes remaining in regulation when Appleby absorbed an elbow that knocked him to the floor that left him bleeding from his forehead. But with Appleby in the locker room receiving stitches, the Gators rallied behind Castleton, Mann and Lewis.

Lewis shook off his recent struggles — he totaled just 15 points and 10 rebounds the past four games — to finish with 15 points, four rebounds and two assists, though he did commit four turnovers. The 6-foot-6 Lewis also showed his defensive prowess much of his 32 minutes on the court.

“One of his better games all year,” White said.

Two free throws by Castleton with 5:14 remaining gave the Gators their first lead, 53-52, since early in the first half.

The Gators built the lead to 59-53 on a step-back 3-pointer by Mann with 2:49 left in regulation, but plenty of drama soon unfolded due to some late-game miscues and the red-hot play of Hokies sophomore Nahiem Alleyne, who finished with 28 points and scored his team’s final 12 of regulation.

With two timeouts and 49 seconds to go, UF guard Noah Locke was whistled for a five-second call while looking to inbound the ball, allowing Virginia Tech to cut the deficit to 62-61 on an Alleyne basket with 29 seconds left.

Florida extended the lead to 64-61, but forward Anthony Duruji missed a pair of free throws with seven seconds remaining and a chance to ice the game. Alleyne answered with a 3-pointer with less than two seconds on the clock to send the game to overtime, where the Gators ultimately prevailed.

A Castleton layup tied the score 68-68 with 3:13 left in the game and UF never trailed again. Afterward, the Michigan transfer from DeLand said a rough March, including just 10 points in the previous two games, served as a wake-up call.

“I know what I gotta bring every day,” Castleton said. “That comes from aggressiveness, playing with a high motor and wanting it more than the other team. It’s win or go home right now, so you have to leave it all on the line.”