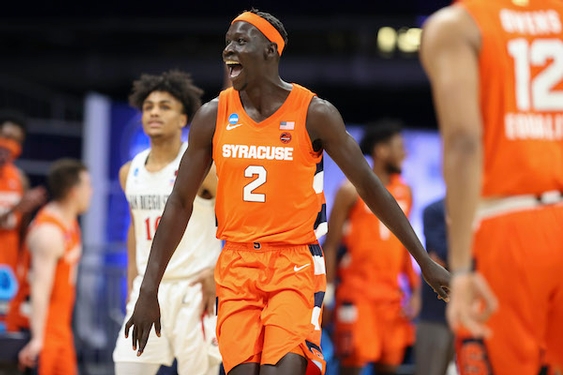 You can lose nine games, you can give up 67 points in a half at Pitt and get beat by 20, you can finish eighth in your conference, you can squeak into the NCAA Tournament. And then you can suddenly make a few shots and get confidence and see all that fuzzy potential suddenly come into glorious, resplendent focus. You can dream.

Or you can win 14 straight games and trail in the second half of only one of them, you can win 53 of your last 59 games, you can win regular-season and conference tournament titles, you can receive praise from the NCAA Tournament selection committee and be rewarded with a high seed. And then you can suddenly miss a few shots and lose confidence and see that memorable season fading, fading, fading away. Just like that, you can be on a bus heading to the airport.

The beauty, and the beast, of March.

That was Syracuse and that was San Diego State on Friday night at Hinkle Fieldhouse in their opening game of the NCAA Tournament.

Eleventh-seeded Syracuse had a disappointing season and advances. Sixth-seeded (and 16th-ranked) SDSU had a wonderous season and goes home. It wasn’t close: 78-62.

Actually, it took slightly longer than that. It took 9 minutes, 39 seconds, which is how long the Aztecs went without a point to close the first half and saw an 18-14 lead become a 32-18 deficit.

In many ways, it was reminiscent of the last time the Aztecs were a 6 seed. That was in 2012, also following a 30-win season. They also were nationally ranked and drew an 11 seed from the Atlantic Coast Conference that had largely underachieved but won enough games down the stretch to sneak into the tournament.

The fear for the Aztecs against Syracuse was twofold: that they would be flummoxed by Jim Boeheim’s funky 2-3 zone, and that his son, Buddy, would shoot over smaller defenders.

The Aztecs were lulled into settling for 3s that weren’t as open as they might have seemed once the long, athletic Syracuse wings came flying at them on closeouts. They finished 11 of 40 behind the arc, and that was only after a barrage of late 3s. They were 3 of 20 (15%) in the decisive first half after entering the game at 37.5 percent (and 38.6% over the 14-game win streak).

And Buddy Boeheim? He scored 16 straight Syracuse points in the first half and had 25 midway through the second half, finishing with 30 after a 7 of 10 performance behind the arc. Nearly all his shots were contested. But he’s 6-foot-6, has a high release point and had a couple inches on his defender.

Not much the nation’s 10th-ranked defense could do about that. The Orange shot 55.3%, best by anybody this season against SDSU.

On a broader scale, the other fear was what would happen against an East Coast team in a season where the nonconference season was truncated and most teams stayed close to home, eliminating the usual cross-country matchups that make it easier to gauge the relative strength of each region.

Or put it this way: It was a rough day for the Mountain West. A few hours earlier, Utah State was bullied off the court by Texas Tech by double figures as well.

It amounts to a bitter end of the careers of Mitchell and Schakel, four-year players who technically could accept the NCAA’s offer of an extra year of eligibility and return next season but are not expected to. They were parts of teams that won 96 games but suffered their most convincing loss in pursuit of No. 97.

Mitchell and Schakel both finished with 17 points, but that included a barrage of points after the outcome was no longer in doubt. In the first half, they were a combined 3 of 16.

About the only thing the Aztecs won was the opening tip. They walked up court to face the 2-3 for the first time and ran one of their favorite zone plays, sending Schakel cutting behind it from the left wing to the right corner while players at the top distracted defenders with passing and screening. It worked to perfection. Schakel got the ball wide open and fired.

Gomez got an open 3 on their next possession.

Then Mitchell tried one.

Even so, they still managed to lead 18-14 on a three-point play by Keshad Johnson after a Lamont Butler steal started the break.

They scored zero points in that 9:39.

Marek Dolejaz had Syracuse’s first three points, then Boeheim got campfire hot and scored its next 16 to retake the lead at 19-18. Then Joseph Girard III got hot, and the Aztecs were in trouble. The Orange were 7 of 17 from deep by halftime and had a pair of four-point plays, one each by Boeheim and Girard.

It didn’t get much better in the second half. Syracuse pushed the margin to 27. Boeheim fired a turnaround, fallaway 3 at the shot clock buzzer. It went in. On its next possession, Dolejaz had his layup at the rim blocked by Mitchell. It went in, too.

Boeheim the coach finally subbed out Boeheim the player. And the Orange promptly hit two more treys to give them 15 on the night.