Michigan coasts by Texas Southern in first round of NCAA Tournament 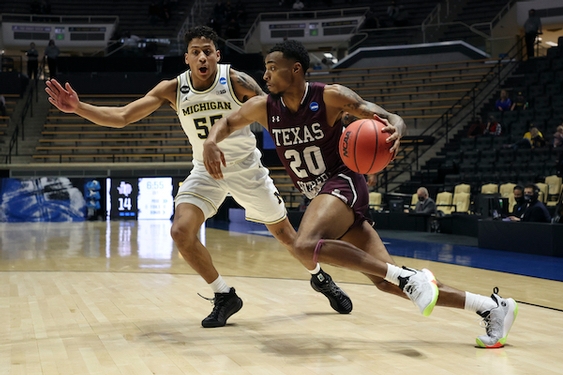 Texas Southern's Michael Weathers (20) drives against Michigan's Eli Brooks (55) during the second half in the first round of the NCAA Tournament at Mackey Arena in West Lafayette, Indiana

A day after a couple Big Ten teams fell to lower-seeded squads in the first round of the NCAA Tournament, the Michigan Wolverines shut down any chance they would become the next victim.

Michigan put its size and defense on display in the No. 1 versus No. 16 matchup against Texas Southern and used a strong first-half effort to take care of business with an 82-66 win Saturday at Mackey Arena.

Michigan advances to face No. 8 seed LSU, a 76-61 winner over No. 9 seed St. Bonaventure, in the second round on Monday. Tip-off time and venue will be announced Saturday night.

After taking an 18-point lead into the break, Michigan kept adding to its cushion in the second half with a baseline drive from Johns and a jumper from Dickinson to make it 50-26 with 17:15 remaining.

But Michigan wasn’t out of the woods. The Wolverines held the Tigers at bay until they started to coast a bit and Texas Southern used a 14-4 run fueled by free throws to pull within 73-61 with 3:40 to go.

Michigan used a pair of free throws from Brooks to push the lead back to 14 before Dickinson fouled out and was called for a flagrant foul. With a chance to cut it to single digits, Texas Southern missed the two free throws and came up empty on its ensuing two possessions.

The Wolverines effectively slammed the door with a 3-pointer from sophomore wing Franz Wagner and driving layup from Smith to make it 80-63 with 42 seconds left.

The Wolverines generated open looks with ease from the start and made four of their first five shots to jump out to a 10-2 lead less than three minutes into the game. Dickinson took advantage of his size down low. Wagner got to the basket with his long strides. Brooks buried a couple early 3-pointers.

Even when its offense cooled a bit, Michigan remained comfortably in the driver’s seat thanks to its defense. The Wolverines gave up nothing easy around the rim, bothered every attempt with their length and held Texas Southern to one-shot possessions. The result? The Tigers made just three field goals and mustered eight points over the opening nine minutes.

By the time Texas Southern reached the double-digit mark, Michigan’s offense had kicked back into gear and the Wolverines took control with a 15-4 run. During the spurt, Michigan attacked the basket, got to the free-throw line and used a pair of 3-pointers from freshman guard Zeb Jackson to open a 29-12 lead with 7:35 left in the first half.

Texas Southern fought back behind Weathers to cut the deficit to nine at the 5:47 mark, but it didn’t last long. Dickinson immediately countered with a hook, the Wolverines continued to rack up free throws and Michigan held Texas Southern to two baskets the rest of the half en route to a 42-24 halftime lead.