FSU holds off UNC Greensboro, 64-54, to advance to second round of NCAA Tournament 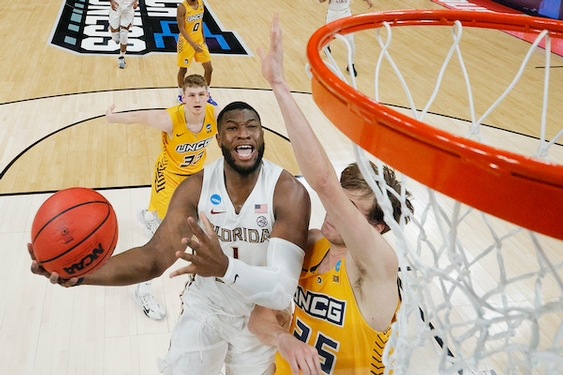 Florida State's RaiQuan Gray (1) drives to the basket against UNC-Greensboro's Hayden Koval (25) during the first half in the first round of the NCAA Tournament at Bankers Life Fieldhouse.

Florida State coach Leonard Hamilton wondered how his team would respond after a tough loss to Georgia Tech in the ACC Championship Game.

With guards M.J. Walker and Scottie Barnes struggling with their shots early on, the Seminoles relied on a stifling defense down the stretch to avoid an upset bid in the first round of the NCAA Tournament.

FSU forward RaiQuan Gray scored a game-high 17 points, seven of which came during a pivotal stretch in the second half and center Balsa Koprivica added 13 points to power the fourth-seeded Seminoles to a 64-54 win over No. 14 seed UNC Greensboro Saturday and into the second round of the NCAA Tournament.

“I thought we bounced back and were able to overcome a lot of adversity,” Hamilton said. “I thought our guys were not settled down and they wanted it so bad that mentally and emotionally we tried too hard. Hopefully, we’ll settle down and relax and be better going into our next game from our standpoint.”

Gray also added seven rebounds, three assists and a block during a crucial run in the second half.

“We knew we had a height advantage and a strength advantage over those guys and we didn’t want to settle for jump shots,” said Gray. “Our game plan coming in was to attack the paint and use our athleticism to get to the basket and take what the defense gives us.”

FSU entered the tournament as the top 3-point shooting team in the ACC, but the Seminoles couldn’t find their shooting touch, failing to convert a shot behind the arc (0 for 9) for the first time since Feb. 25, 2018.

“When I look at the stat sheet, I’m really surprised that they only shot 25% from 3 [point line] because I would have thought they were raining 3s from the parking lot,” Hamilton said. “We’ve had some challenges of late. We turned the ball over 25 times in the Georgia Tech game and we came in tonight and we didn’t shoot the ball well from 3, so I’m looking at this as a positive.”

UNCG took advantage of those lapses in shooting, as well as some crucial turnovers to stay in the game. Guard Isaiah Miller, who was the two-time Southern Player of the Year, sparked several scoring runs that kept the Spartans as close as a point. He finished with 17 points, five rebounds and four assists.

But the Seminoles came up with a big stop late in the second half, holding UNCG scoreless for more than three minutes while pushing their lead to 57-50 with 1:01 left in the game.

“I think it was our defense that won us the game today,” Hamilton said. “When you’re not shooting the ball well, your defense can carry you in games like this and that’s what happened for us today.”

Added Gray, “Our defense was what pulled us through this game.”

It was the third straight double-digit scoring performance for Koprivica, who scored seven points and has four rebounds in the first four minutes to start the second half.

“Balsa told me the other day that what he’s trying to do is play to exhaustion and then come out of the game,” Hamilton said. “This has been his focus now over the last several games and he seemed to be more productive when he’s really going to exhaustion and then asking to come out of the game. He’s blocking shots, rebounding, he’s running the floor and giving us an inside presence that I think is showing his capabilities.”