Kansas rallies from 10 down, gets past 14 seed Eastern Washington in NCAA first round 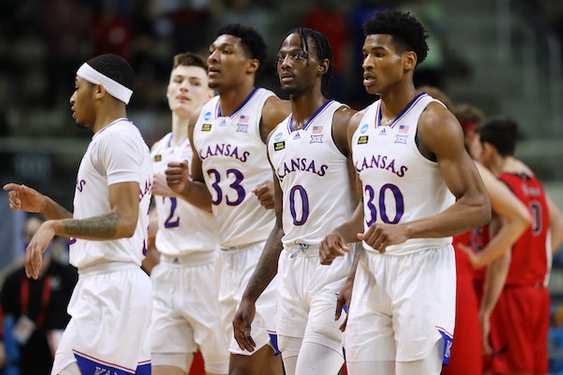 Kansas' Ochai Agbaji (30), Marcus Garrett (0) and David McCormack (33) during the second half against Eastern Washington in the first round of the NCAA Tournament at Indiana Farmers Coliseum

Kansas’ men’s basketball team opened its 49th NCAA Tournament the way it has started a vast majority of postseasons throughout history — with a victory, albeit a narrow one.

The Jayhawks, the No. 3 seed in the West Regional, won their 35th round of 64 game in their last 37 tries by rallying from a 10-point second-half deficit to trip No. 14 seed Eastern Washington, 93-84, on Saturday at Farmers Coliseum in Indianapolis.

Junior power forward David McCormack returned from more than a week-long stay in Lawrence because of COVID-19 protocols to score 22 points and grab nine rebounds in 25 minutes.

Senior guard Marcus Garrett scored 20 points and grabbed eight boards and freshman point guard Dajuan Harris added a career-high 13 points in 35 minutes as the Jayhawks (21-8) won their 14th straight NCAA first-round game and improved to 15-2 in first-round contests in the 18-year Bill Self era. There was no tournament last year in response to the COVID-19 pandemic.

“For him to play that many minutes and play that well was terrific,” Self said of the 6-foot-10 McCormack after the game.

“I didn’t feel he looked as good moving, considering all the time off. I thought he looked very patient once we got into the second half. I thought David’s attitude coming back (on Friday from Lawrence) was tremendous,” Self added.

Ochai Agbaji totaled 21 points on 8-of-17 shooting (3 of 9 threes) and Christian Braun 12 points on 2-of-11 shooting (6 of 6 from line) for the Jayhawks, who will meet the winner of Saturday’s USC-Drake game in a second-round contest on Monday in Indianapolis. The time and location will be announced after Saturday’s games are concluded.

KU survived a career-high 35-point outing from EWU junior forward Tanner Groves. He had the second-most points against KU in an NCAA Tournament game in the Self era. Ben Woodside of North Dakota State had 37 in a loss to the Jayhawks in 2009.

McCormack, who had been sidelined more than a week after testing positive for COVID-19, joined his teammates on Friday in Indy.

“We felt his energy, felt his presence. He was happy to be with us and happy to be on the court,” Garrett added of McCormack.

“Those brothers were terrific,” Self said.

Tanner Groves scored 16 points on 5-of-7 shooting and Jacob, 16 on 6-of-8 shooting (combined 6 of 9 from 3) as the Eagles led 46-38 at halftime. Michael Meadows had five assists and Jacob Groves five rebounds the first half. KU’s Garrett had 12 points and four boards, but also three fouls the initial half.

KU’s Mitch Lightfoot, who made his first start of the season and eighth of the career, exited two minutes into the game with KU down by an alarming 9-0 score. McCormack entered with Harris for starter Bryce Thompson at that point and the Jayhawks rallied to lead 16-15 at 14:08 and 20-17 at 10:35.