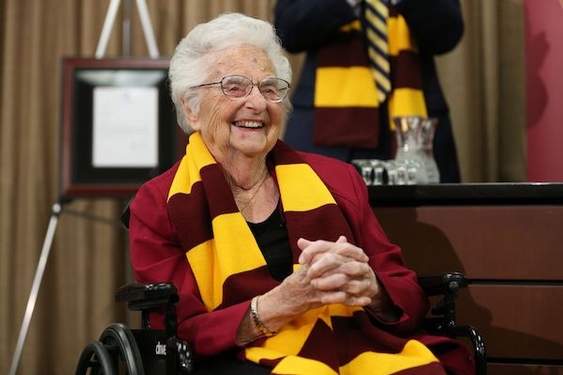 Sister Jean Dolores Schmidt smiles after being presented the 2018 Senior Hall of Fame award from the Illinois Department on Aging (IDoA) during a ceremony at Loyola's Corboy Law Center.

Sister Jean Dolores Schmidt took a few minutes out from making her scouting report on Illinois Saturday to talk to the media on a Zoom call from her Indianapolis hotel room.

But the 101-year-old team chaplain for the Loyola Ramblers didn’t want to say too much in case any Illinois fans were on the call.

“I don’t want to tell them my secret,” she said.

Sister Jean’s secrets are safe for now, though anyone who has seen the No. 1 seed Illini play knows Loyola is in for a Sunday in the second-round game at Bankers Life Fieldhouse.

Between watching a tape of the Illinois-Ohio State championship game from the Big Ten Tournament and working on the team prayer she’ll give to Loyola players pregame, the NCAA Tournament’s biggest celebrity fan had a busy day ahead of her.

She came to Indianapolis after missing all the regular-season and conference tournament games due to COVID-19 protocols. She watched Loyola gut out a first-round win over Georgia Tech Friday from her wheelchair in the balcony of Hinkle Fieldhouse, with senior associate athletic director Tom Hitcho, assistant sports information director Ryan Haley and caregiver Maureen McFadden at her side.

“None of us talked during the game at all, until halftime,” she said. “I just like to be quiet and play right along with them. I like to watch their strategy. People say, ‘Sister Jean, do you pray during the game?’ I say, you better believe that I do.

“I want God to help them all the way, and I don’t want them to get injured. And (Friday) that floor needed mopping just about every time they ran up and down the floor.”

There were no injuries, and Sister jean was satisfied the calls went both ways on slipping players.

Not everything has gone according to plan for the Zooming nun. Sister Jean said her “email has gone awry,” so she had to ask Hitcho to deliver a handwritten note to the players regarding Friday’s win.

While the Ramblers are 7-point underdogs against the top-seeded Illini, Sister Jean had already picked them to beat Illinois in her brackets, and on Saturday, called Loyola “the little engine that could.” She chose to study the Illini’s Big Ten title game win instead of Friday’s first-round romp over No. 16 seed Drexel, because the Buckeyes nearly beat Illinois while Drexel wasn’t an “even match.”

What makes her think Loyola can pull this one off?

“I have to do some of this with my heart,” she said. “When bracketologists do these brackets, they do some by heart, some by head and some by numbers. So this is by heart. I have to put Loyola there to the Sweet 16 ... That’s a lot of heart in there.”

The last time the two teams played in the NCAA Tournament was in 1963, when Loyola beat the Illini to advance to the Final Four — eventually winning it all. Sister Jean was 43 at the time, and remembers the win over Mississippi State in the NCAA title game, but not the Illini game.

“We didn’t have TV until the final game,” she said. “So there wasn’t that much watching.”

But she recalled going to another convent that had a bigger TV to watch tournament games in the mid-1950s.

Like most everyone else, Sister Jean had been in lockdown from before Thanksgiving until a couple weeks ago. She was allowed guests at her living facility for those four months, they had to stay outside, instead talking to her through glass. She told her friends not to bother.

“I didn’t want my guests sitting outside in nine and 10-degree weather while I was sitting inside in the warm (room),” she said. “So I didn’t have guests until last week. A couple sisters came to see me. It was just great. And coming to Indianapolis was just fine, but we’re limited here, too.”

She’s getting room service in Indy and has a nurse on hand, but otherwise is on her own, giving her time to work on her speeches to the players. Her first one sounded a lot like a Nike commercial.

The Ramblers did it on Friday, and now they’ll see if they have a prayer against the mighty Illini.