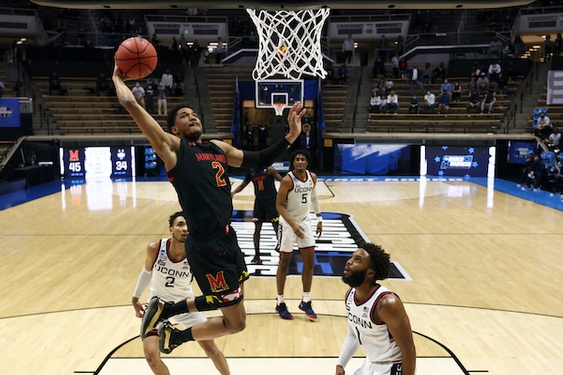 Maryland's Aaron Wiggins (2) drives to the rim as Connecticut's R.J. Cole (1) looks on during the second half in the first round of the NCAA Tournament at Mackey Arena.

On the other end of the court, the sophomore guard took a blow to the face that was ruled a charge. He lay on the ground for a moment before jumping to his feet to celebrate exuberantly with his teammates.

After a 63-54 win over No. 7 UConn on Saturday night, the Terps are staying in Indianapolis for a Round of 32 matchup with second-seeded Alabama on Monday.

Despite giving up 18 first-half rebounds, Maryland led 33-22 at halftime off the strength of a defense that limited UConn to 23% shooting from the field and Ayala’s strong half. The Terps ended the half on a 15-3 run, while the Huskies went scoreless over the final 3:38.

Maryland led by as many as 14 early in the second half, trading makes with UConn, including a sequence that included back-to-back-to-back dunks by Scott, UConn forward Adama Sanogo and Wiggins.

UConn got to within five, 53-48, after Bouknight found inside leverage for a post score over senior guard Darryl Morsell, with 2:53 left. Morsell (seven points) fouled out for just the second time this season with 1:50 left.

A pair of made free throws by Ayala — an extra one awarded because of a lane violation — gave Maryland a 55-48 lead with 2:36 left. A wrap-around pass in the lane to a cutting Hart for a layup put the Terps up by eight with 69 seconds left.