No. 1 seed Illinois leaves the NCAA Tournament with unfulfilled promises and a wasted opportunity. 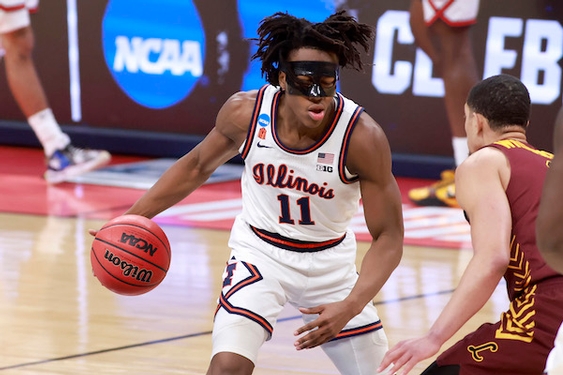 Ayo Dosunmu (11) of the Illinois Fighting Illini in action against the Loyola Ramblers during the first half in the NCAA Basketball Tournament second round at Bankers Life Fieldhouse.

In the closing seconds of an extinguished dream, Illinois star guard Ayo Dosunmu reached across the key at Bankers Life Fieldhouse to hug teammate senior Da’Monte Williams between Loyola free throws. The inevitable was coming.

And when it did as the buzzer sounded, Dosunmu spotted point guard Andre Curbelo doubled over in crushed astonishment by himself across from Loyola’s bench. Dosunmu jogged over to the freshman, slung his arm around Curbelo’s shoulders and encouraged him as they walked across the court.

Dosunmu high-fived teammates, hugged assistant coaches and shook hands with staff members before exiting the court — in all likelihood for the final time as an Illinois player.

The scoreboard above him read: Loyola 71, Illinois 58.

The No. 8-seeded Ramblers are headed to the NCAA Tournament Sweet 16, knocking out No. 1 Illinois in the second round to earn state bragging rights and dash the Illini’s national championship aspirations.

“I told my team, keep your heads high,” said Dosunmu, a junior. “We wanted to win this game. We didn’t get it done, but at the end of the day you’ve got to take your medicine. That’s what I’m doing now; I’m taking my medicine.”

A sour taste isn’t the way Dosunmu — the best player to wear an Illinois jersey in more than a decade — planned to say goodbye. He was supposed to be beaming, hoisting a trophy and slicing down nets as validation of Illinois’ most talented team since 2005 before he departed to enter the NBA draft.

Dosunmu forced himself to smile anyway. The team’s captain until the end.

“When I go through times like this, I try and think of the positives,” he said.

There were few of them Sunday.

Illinois fans waited tensely for one of Dosunmu’s superhero-esque, clutch finishes in his black protective mask for his broken nose. It never came.

Loyola’s defense kept Dosunmu from taking over, getting into him the way few — if any — Big Ten opponents managed. He shot 4 of 10 for nine points with six turnovers.

This one will be hard to forget.

The Illini never led, letting Loyola control the pace and fluster them with a switching, rotating and dizzying defense. The Illini (24-7), the first No. 1 seed to fall in the tournament, scored a season low and turned the ball over 17 times.

The Illini’s transition game, their bread and butter, produced only two points.

Their defense had contained national player of the year candidate Luka Garza during the conference tournament, but they couldn’t stop Loyola big man Cameron Krutwig, who finished with 19 points, 12 rebounds and five assists.

“The first 10 minutes of that game they got us on our heels and we never really recovered,” Illinois coach Brad Underwood said. “They just rocked us.”

“We tried everything in the bag,” Underwood said. “Everything that’s made us one of the most efficient offensive teams, for whatever reason, didn’t work.”

After recently establishing itself as a team with multiple weapons — and posing a seemingly impossible pick-your-poison scenario with Dosunmu and Cockburn — only two Illinois players scored in double digits.

Trent Frazier, a senior, connected on only 1 of 10 shots, missing all five of his 3-point attempts.

Cockburn didn’t score until he dunked nearly 11 minutes into the game, but he was Illinois’ most reliable player with 21 points and nine rebounds. Adam Miller, a freshman, added 10 points on 4-of-6 shooting.

Illinois cut Loyola’s lead to 39-33 in the second half, threatening a comeback. But Loyola continued to follow its game plan and contained the Illini.

“We had looks but couldn’t throw a penny in the ocean,” Dosunmu said.

Champaign erupted in joy on Selection Sunday. Illinois was back in the tournament for the first time since 2013. It had the talent, depth and experience to go all the way.

Knowing next season will be without Dosunmu and possibly Cockburn — who considered entering the draft last season — the loss felt like a diamond ring slipping off a finger and irretrievably going down a drain. A lost opportunity that won’t come around again with this bunch.

“The hardest part of making the NCAA Tournament, when you lose, is the locker room,” Underwood said. “It’s family. You see a lot of guys hurting, a lot of guys in tears, a lot of guys disappointed. Such is life. Life deals you some challenging blows at times. You’ve got to wake up in the morning, the sun comes up, and you have to go about your business. Today was not our day.”

The silver lining Dosunmu stressed after the game certainly has validity.

The top-flight recruit out of Morgan Park changed the trajectory of the Illini program under Underwood. The door has opened to other Chicago recruits who had previously spurned Illinois.

Earning a No. 1 seed and winning the Big Ten Tournament title are moments to savor.

They have young talented players to build around, including Miller and Curbelo.

“Where Illinois basketball was four years ago compared to where it is now,” Underwood said, “I like where we’re at. I like our young guys. I like our pieces. We have to continue to work and stay at this level.”

As for Dosunmu, Underwood noted his jersey would be retired one day in the State Farm Center rafters.

Just minutes after the loss, Dosunmu told reporters he was focused on positive memories: winning a Big Ten Tournament championship, enduring COVID-19 protocols with teammates, the grueling workouts and practices, having fun with his guys, bringing a dormant program back to life.

“I’m hopefully remembered as the guy that really helped turn this program around,” he said. “That’s what it’s all about. When I came here to Illinois, I came here to, of course, try to win a national championship. But my main goal was to help get this program back on the map, help get this program back as one of the national powerhouses. We didn’t get it done today, but at the end of the day, this group of guys, there’s no other team I want to go to war with.”

This Illinois season will be remembered for unfulfilled promise.

Dosunmu, however, will be remembered as one of the best to play at Illinois.