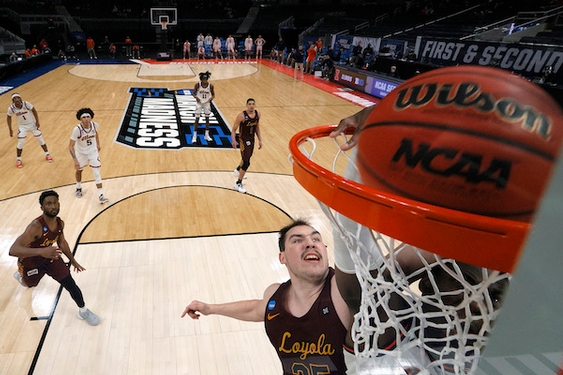 No. 8 seed Loyola is replicating its magical NCAA Tournament run from 2018, this time ousting No. 1 seed Illinois 71-58 for a trip to the Sweet 16.

Loyola controlled the game Sunday at Bankers Life Fieldhouse, relying on its trademark defense, ball sharing and big plays from its star seniors. Those elements should seem familiar to anyone who watched the Ramblers serve upset after upset during their Final Four run three seasons ago.

Illinois becomes the first No. 1 seed to go down in this year’s tournament.

Even as Illinois threatened to make a run, Loyola held strong. The Ramblers led by 14 in the first half and took a 13-point lead after Illinois had cut it to 39-33 in the second half.

Cockburn didn’t score until about 11 minutes into the first half, but he was Illinois’ most reliable force, finishing with 21 points and nine rebounds.

Illini star Ayo Dosunmu, a junior likely playing his last game in an Illinois uniform with plans to enter the NBA draft, had one of his quieter games with nine points on 4-of-10 shooting.

Loyola chaplain Sister Jean cheered from the stands in her wheelchair as the Ramblers delivered another tournament upset.