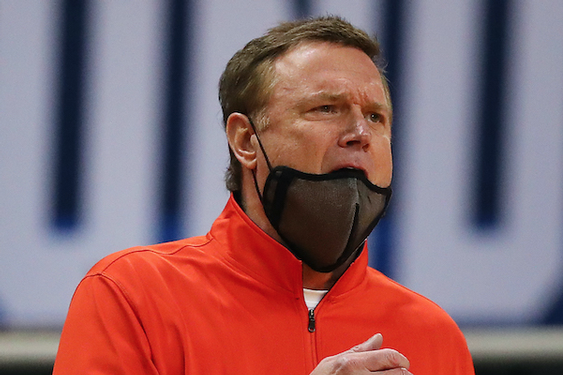 Head coach Bill Self of the Kansas Jayhawks reacts on the sidelines during the first half against the Eastern Washington Eagles in the first-round game of the 2021 NCAA Men's Basketball Tournament.

Basketball Hall of Famer Bill Self, who refers to himself as “a big history guy when it comes to our sport,” says he looks forward to coaching a game Monday night in tradition-rich Hinkle Fieldhouse.

The 9,100-seat arena, located on Butler University’s campus in Indianapolis, not only has been the regular home of the Butler Bulldogs since 1928, but the place featured prominently in the 1986 movie, “Hoosiers.”

“That was one of the things I’ve said all along: I hope we get a chance to play in Hinkle,” Self, Kansas’ 18th-year men’s basketball coach said Sunday. Hinkle is one of various buildings in and around Indianapolis being used during the entire men’s NCAA Tournament.

No. 3 seed KU (21-8), which defeated Eastern Washington 93-84 in a first-round game Saturday at Farmers Coliseum in Indianapolis, has been assigned Hinkle for an 8:40 p.m. second-round game against the No. 6 seed USC Trojans (23-7). The game will be shown live on CBS.

“I have not been there. Of course I’ve been a fan of it since the movie came out,” Self added. “Obviously we play in a fieldhouse very similar to Hinkle.”

That would be tradition-rich Allen Fieldhouse, which opened in 1955 and seats 16,300 fans. Of course, just a spattering of fans have been allowed in both buildings because of COVID-19 regulations this past season and current postseason.

Self said upon arriving at Hinkle on Monday night, “I’ll look around the inside of the building. I don’t know if they’d let us walk around it (because of COVID-19 protocols).

“I’ll certainly study it. I’ll probably study it and compare it to Allen, how old the building is and the feel. I don’t know when Hinkle was built. That’d be stuff I’d like to know personally about the building.”

Of his team’s reaction to playing in Hinkle, Self said: “Every player has seen the movie ‘Hoosiers.’ We’ll certainly make sure they understand that’s where we’re playing.”