Amid NCAA weight room backlash, one voice on gender inequality was missing — Kobe’s 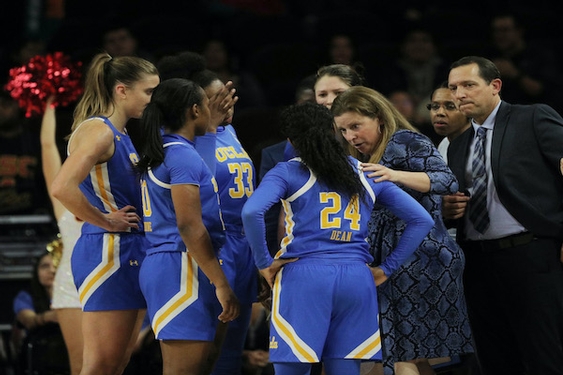 During a normal first weekend of the NCAA men’s basketball tournament, the average college hoops fan would have hardly been made aware that the women’s tournament was on the verge of tipping off. That changed this week only due to the NCAA’s embarrassing display of how much it prioritizes the $800-million men’s event, which spilled onto social media feeds from the women’s event in San Antonio.

Thankfully, you probably saw the public relations carnage, but to review: While the men had a weight room setup in Indianapolis that would have satisfied the NBA bubble, the women were rewarded for playing through pandemic protocols all season with the equivalent of a Courtyard Marriott gym, with one set of dumbbells and yoga mats.

It wasn’t just the weight training disparity — the gift bags and food options were highlighted, too — but that’s what triggered the women’s basketball world to lose the Zen that comes with a lifetime of being made to feel grateful for anything it gets.

The NCAA Final Four logo for the NCAA college basketball tournament is painted on a window in downtown Indianapolis.

With pain percolating along the San Antonio River Walk, amid all of the vitriol aimed at the ill-fitting suits inhabiting NCAA headquarters in Indianapolis, UCLA women’s basketball coach Cori Close couldn’t help but feel the absence of a crucial voice.

“It made me miss Kobe Bryant,” Close said. “He’s such a pioneer for speaking up on behalf of our women’s game. … I hope NBA athletes, we need our male counterparts that know what we do [to] come alongside and be like Kobe [and say], ‘I’m going to help with this. I’m going to move for people to know about this, for people to invest in this, my time, my voice, my platform and even my resources.”

Bryant’s global platform was certainly missed this week. What would he have said? Something powerful, sure. But most importantly, we know that he would have done something — heck, he was already doing it.

Bryant was a proud “Girl Dad” to four daughters, including Gianna, who died with him tragically at 13. She was a budding basketball star, and her father was by her side every step of the way, but he was invested in the future of women’s hoops as a whole, not just making sure Gianna had the edge to get that scholarship offer from Connecticut coach Geno Auriemma.

One of Bryant’s proteges, Sabrina Ionescu, the former Oregon star now with the New York Liberty, was one of the first big names to call out the NCAA for its error.

You could almost hear Kobe saying something similar.

Stephen Curry and Kyrie Irving also voiced their displeasure, among others from the NBA, answering Close’s call.

“I’m thankful for some of the people that spoke out,” Close said, “but I hope more will follow, and I hope they will follow Kobe’s example.”

Odd, but it was a former NBA player with an Instagram profile picture of Bryant who provided a poignant reminder of how far some men have to come.

Nick Young, former USC player and former Laker, responded to an Instagram post about the issue and said, “Man y’all not bringing in the big bucks y’all the JV team and it’s cool.”

South Carolina women’s basketball coach Dawn Staley commented, saying, “hope all your kids are boys and I truly hope he can play. Lord knows if you have to sit down with a daughter and tell her you’re not a money maker so be ‘cool’ with that.”

Young has a daughter, Navi.

A Los Angeles native, Young was clearly a fan of Bryant, who sent the message with his actions that a man shouldn’t need to have a daughter to respect the athletic ability of women and heartily cheer them on.

Wow, Pac-12. Were we really watching the best men’s college basketball conference in the country all season but didn’t even know it?

UCLA went 2-0, knocking off Michigan State in overtime and then Brigham Young. Oregon State put a muzzle on Tennessee. Colorado stampeded Georgetown. USC breezed by Drake. Oregon, well, it didn’t even have to take the floor against Virginia Commonwealth, which had COVID-19 issues that led to a no contest for the Ducks. (This was all too similar to the Ducks’ entry to the Pac-12 football title game over Washington).

The Pac-12 is 5-0, carrying the best winning percentage into the round of 32. Of course, so much can change Sunday and Monday if the league’s quintet doesn’t keep it going.

But at a minimum this showing should give the conference momentum it hasn’t had in years heading into next season.

The #NotNCAAProperty movement stayed pretty quiet during the first round, but its leaders — Rutgers’ Geo Baker, Michigan’s Isaiah Livers and Iowa’s Jordan Bohannon — all advanced to the second round.

To force the NCAA into real action on the name, image and likeness issue, the players will need to come up with a way to make the schools feel vulnerable in their pocketbooks.

I’d be shocked if there are enough players from multiple teams that would agree to threaten to not play a game. Playing in this tournament is a lifelong dream for many, and they’ve already sacrificed much of their personal freedom to get to this point during a season dictated by COVID protocols.