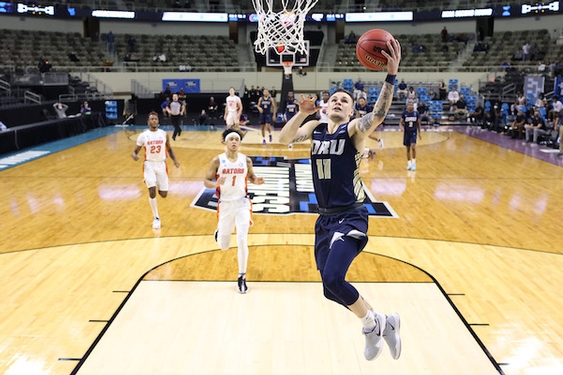 With the Sweet 16 well in sight, the Florida Gators stumbled down the stretch to blow multiple double-digit leads against Oral Roberts and end their season with a bitter 81-78 defeat.

A jump shot by Noah Locke with 9:48 remaining gave coach Mike White’s squad a 67-56 advantage, but UF fell into one of its signature offensive funks and the Gators’ sloppy play, including 20 turnovers, caught up to them against the No. 15 seeded upstart Golden Eagles.

Oral Roberts (18-10) slipped ahead during the final three minutes to continue its magical run as the NCAA Tournament’s Cinderella.

“They were terrific,” White said. “What a story.”

The Gators (15-10) were positioned to send Oral Roberts packing and back to Tulsa, Okla. Instead, the Golden Eagles joined the 2013 Florida Gulf Coast squad as the only No. 15 seed to advance to the Sweet 16, where Oral Roberts will face Arkansas.

Meanwhile, UF suffered its first loss to a double-digit seed in the NCAA Tournament since a 2004 defeat to No. 12 seed Manhattan, a stretch of 17 matchups in the Big Dance for the Gators.

Oral Roberts rallied behind the 1-2 scoring punch of guard Max Abmas and forward Kevin Obanor, who combined for 54 points— 28 by Obanor. That included 20 second-half points by Obanor, whose layup with 2:56 remaining gave his team its first lead, at 78-77, since the 1:53 mark of the first half.

Locke answered with a short jumper in the paint with 2:29 left to give the Gators’ their last lead, 78-77, and points of the game. A 3-pointer by Deshang Weaver 20 seconds later proved to be the game-winner for Oral Roberts.

Until the late surge, the Golden Eagles stayed in the game from the free-throw line, finishing 19-of-23 shooting including 12-of-12 by Abams, who finished with a game-high 26 points.

Locke, with 17 points, was one of four Gators in double figures, led by sophomore star Tre Mann’s 19 points. Mann hit two 3-pointers and a jump shot during the opening minutes of the first half as UF maintained control of the game.

Mann, though, did not score again, a key to the Gators’ late-game struggles.

“You’re not going to beat a good team with 20 turnovers,” Mann said.