In a game full of intensity and weird twists, Texas Tech falls to Arkansas in heartbreaking fashion 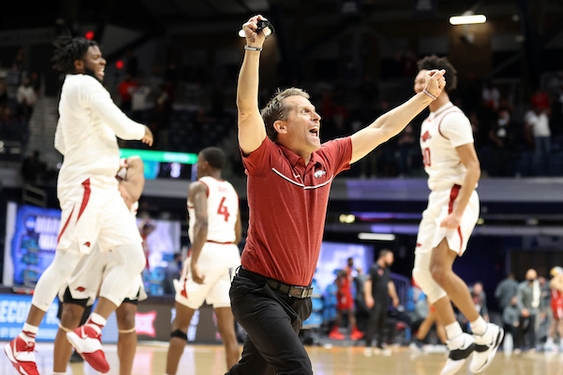 Even when Arkansas was throwing down dunks and frustrating Texas Tech on defense, the game wasn’t over.

It never quite was with Tech this season.

Somehow, despite being outplayed for long stretches of the second half and trailing by as much as 13, the Red Raiders were around in the final minute with a chance.

Three of them, in fact, despite 36% shooting. Like too many times this season, Tech was unable to close the deal.

The result: a 68-66 loss to Arkansas in the second round of the NCAA South Region, one played with regional final intensity and weird twists.

Think consecutive banked-in 3-pointers during a key stretch in the second half.

Once a national power under Nolan Richardson, Arkansas (24-6) advanced to its first Sweet 16 in 25 years. It marked the first time in three tournament appearances under coach Chris Beard that Tech (18-11) didn’t make it to at least the second weekend.

“Well, I thought they had a lot of fight,” an emotional Beard said afterward. “We’ve been doing that all year. We call it play it to the bone. We really competed down the stretch and gave ourselves a chance. Just proud of our players. It’s a hurt locker room right now.”

The Red Raiders certainly had their chances after cutting the Arkansas lead to one, 67-66, on a pair of free throws by Terrence Shannon with 1:56 remaining.

Mac McClung, an 80% free throw shooter, missed the front end of a 1-on-1. With Tech still down one, Shannon was off on a difficult reverse layup. Then Kyler Edwards couldn’t connect on another contested driving layup just before the buzzer with Tech needing a basket to tie.

Arkansas’ Justin Smith, who topped Arkansas with 20 points, switched off Shannon and applied the defensive pressure.

“I’ve always tried to put the game in players’ hands,” Beard said. “Those are situations we practice, we call them ‘chaos.’ We knew the objective. I thought Kyler made the right play.”

Shannon led Tech with 20 points and recalled Beard’s message when they trailed in the second half.

“He said we going to win the game on the offensive end if we get stops,” Shannon said. “And that’s what we did, but we didn’t capitalize at the end.”

For the attributes of this year’s Tech team, it lacked the offensive go-to guy of past seasons. There was no Keenan Evans or Jarrett Culver or Davide Moretti.

In a strange press conference that included a power failure at venerable Hinkle Fieldhouse, Beard really didn’t want to address what his team didn’t do. Or a whole lot of game topics, for that matter.

“You’re trying to talk about basketball, and our journey just ended,” Beard said. “This team came together during a worldwide epidemic called COVID. Guys chose Texas Tech over Zoom visits. Guys got there and worked really hard. Got racial, just ridiculous stuff going on in our country. We attacked that head on.

“I have so much respect for these players. This is a season unlike any other season ever, hopefully, unless there’s a COVID-20 one day, and I hope I’m not around to see it.”

He suggested that if the NCAA Tournament is completed, it’s the players who deserve the credit.

“Got to be like a standing ovation from America, anybody that’s enjoyed the tournament,” Beard said. “The sacrifices and the discipline that these players have shown this season to get to the finish line. Hopefully, that’s what I’ll remember most about this season.”

The loss and the hurt still remain. Beard drew a comparison to Tech’s defeat in the 2019 NCAA championship game to Virginia.

“It always stings unless you’re out there on that final Monday night with that confetti,” Beard said. “I’ve been there, but the confetti wasn’t coming down on us. That’s the deal. I won’t stop trying everything in my power to win that whole thing one day.”