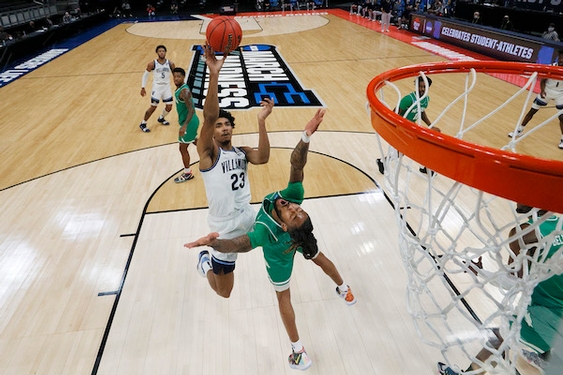 Villanova finally unleashed its offense Sunday night, and reached the Sweet 16 of the NCAA Tournament for the seventh time in the Jay Wright era.

The Wildcats shot 55.4% on the night, placed four players in double figures, and used a 34-6 run in the first half to establish control, rolling to an 84-61 victory over No. 13-seed North Texas in an NCAA second-round game at Bankers Life Fieldhouse in Indianapolis.

Villanova (18-6) moves on to the South Region semifinals and a date next weekend against No. 1 seed Baylor.

The Wildcats, who led 47-27 at the half, shot over 50% for the first time in nine games, and their 15 three-point baskets tied a season high. Eight different players made at least one three.

The major breakout midway through the first half came with little warning. The Wildcats were outrebounded, 7-1, in the opening 6 ½ minutes as the Mean Green scored five of their first seven points on putbacks.

When Hamlet hit a basket in the lane, North Texas was shooting 8 of 12 from the field and leading 21-13 with 11 minutes, 32 seconds left in the opening half. At that point in the game, Villanova had one defensive rebound.

But the script flipped quickly. The Wildcats knocked down 14 of their last 20 shots in the half including 6 of 10 three-pointers from five different players.

The surge began with a 13-0 run over a 4 ½-minute span closed out by a three from Daniels with 8 minutes to play. After a Hamlet basket for North Texas, the Wildcats got a conventional three-point play from Moore and back-to-back threes by Cole Swider in a run of nine straight points.

Hamlet broke that streak again with a bank shot in the lane, but the Cats ripped off the next seven points, capped by Samuels’ follow-up basket with 2:23 to play that made it 42-25. In the last two minutes, Eric Dixon swished his second three-pointer of the season, Robinson-Earl converted a spinning shot in the lane, and the half ended with ‘Nova up by 20.

Six different players hit three-point baskets in the first half. Two of them came from Chris Arcidiacono, who had not made a trey in any of the 11 games he had played prior to Sunday.

The margin grew as high as 26 later in the half.

North Texas, which won four straight games in the Conference USA tournament to qualify for the NCAA Tournament, was coming off a 78-69 overtime upset of No. 4 Purdue in the first round. The Mean Green sported a veteran lineup with four seniors and one junior, all making up the same starting lineup for 28 consecutive games.