In Collin Gillespie’s absence, Villanova continues to step up and improve in the NCAA Tournament 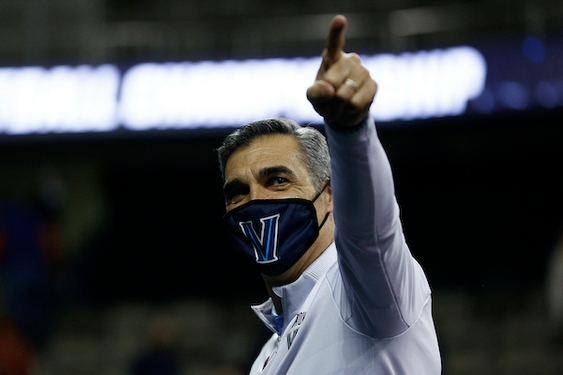 Life without Collin Gillespie remains less than ideal for Villanova, but the Wildcats are finding more ways to successfully cope with his loss, and just at the right time, too.

The Cats arguably played their best game of the season in the second round of the NCAA Tournament, excelling at both ends of the court Sunday night in their 84-61 win over North Texas. They earned a Sweet 16 berth against No. 1 seed Baylor in Saturday’s South Regional semifinals at Hinkle Fieldhouse in Indianapolis.

After back-to-back losses following Gillespie’s season-ending knee injury on March 3, Villanova has adapted and actually has thrived in the NCAA Tournament. With a lot of interchangeable parts and increased production from their bench, the Cats are playing with purpose and confidence.

Against the Mean Green, Villanova (18-6) shot 55.4% from the floor and 50% from three-point distance, tied a season high with 15 threes and committed just six turnovers while dishing out 19 assists on 31 field goals.

For Jay Wright, it starts with player leadership. The coach lost Gillespie and fellow senior captain Dhamir Cosby-Roundtree, who missed the entire season with a stress fracture in his shin, leaving him with his two remaining captains, senior Jermaine Samuels and sophomore Jeremiah Robinson-Earl, to make sure their teammates stay focused.

“You’re the only captains left, a lot more responsibility with you guys,” Wright said he told them. “Talked to the juniors, ‘You’ve got to step it up. You know what Collin does off the court. You guys have to do that.’”

Villanova head coach Jay Wright shouts during the second half of a second-round game against North Texas. The Wildcats won 84-61 to advance to the Sweet 16. Read moreDarron Cummings / AP

The next thing was to change the focus of the offense without Gillespie.

“Players have to step up,” Wright said after Sunday’s game. “We talk all year to our guys about the fact that, ‘You might not be playing right now, but you know you’re getting better every day. You never know when you’ll get your chance, it might be next year, but you know you’re ready.’

“Good teams have guys that are not playing but they’re good enough to be playing, they just have better guys in front of them. I think that’s what it came down to with our guys like Chris Arcidiacono, Bryan Antoine, and Eric Dixon. They’ve been ready and they’re talented guys. And I think that’s making a difference.”

Arcidiacono has started the last three games at the point, and drilled his first two three-pointers of the season Sunday night. Antoine showed he is back from his shoulder problems, playing 41 minutes in the tournament’s first two games, scoring 14 points and contributing solid defense. Dixon continues his improvement.

“We always have this mentality that it’s next man up,” said Samuels, who had 15 points and nine rebounds against North Texas. “All the guys that are playing right now have been working since they stepped into the program — Bryan, Archie, and Eric. They’ve been working so hard and they’ve always been ready. So even though Collin goes down, we were ready to have those guys make an impact.”

Wright hopes his group can continue its momentum as it prepares for Baylor (24-2), which defeated Wisconsin, 76-63, on Sunday. The two teams last hooked up on Nov. 24, 2019, in the championship game of the Myrtle Beach Invitational, with the Bears coming away with an 87-78 victory.

Each team placed four players in double figures. All four are back for Baylor — Jared Butler (22 points), MaCio Teague (18), Davion Mitchell (13), and Matthew Mayer (10). Jeremiah Robinson-Earl (12) and Cole Swider (11) return for Villanova, but Gillespie (27) is sidelined and Saddiq Bey (16) left for the NBA.

“We know how good they are,” Wright said. “But we’ve got a few days of practice here to try to prepare. I think they’ve been one of the best teams in the country, them and Gonzaga, all year. So we’ll get to play the best. And that’s why you play in the NCAA Tournament. You look forward to these types of games.”

The Wildcats have played eight games at Hinkle Fieldhouse against Big East opponent Butler, going 4-4, with the four defeats coming in their last five games.