UCLA cruises past Abilene Christian and into to the Sweet 16 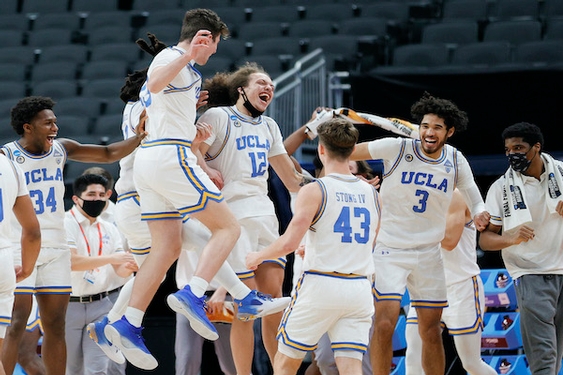 The UCLA Bruins celebrate their win over the Abilene Christian Wildcats in the second round game of the 2021 NCAA Men's Basketball Tournament at Bankers Life Fieldhouse.

UCLA coach Mick Cronin joked that he didn’t want his team to stumble its way into four turnovers before the first television timeout against a team that forces them in bunches.

It turned out the Bruins didn’t have that many before the game was essentially over.

Needing to be smart and composed, UCLA emphatically checked both boxes during one of its most complete victories of the season Saturday afternoon at Bankers Life Fieldhouse.

The Bruins are sticking around the nation’s new college basketball capital a while longer after stomping Abilene Christian 67-47 in an NCAA tournament second-round game, sparking an impromptu group dance on the court.

UCLA (20-9) advanced to a regional semifinal for the first time since 2017 and became the fifth team to advance past the First Four weekend since that format started in 2011.

UCLA’s Johnny Juzang scored 17 points and Cody Riley powered his way to 12 points and 12 rebounds for a team that just seems to be hitting its stride after playing for the third time in five days.

The Bruins committed only eight turnovers and will play either third-seeded Alabama or 10th-seeded Maryland in a regional semifinal next weekend.

UCLA put the game away with a 14-1 run to start the second half. The Bruins were excellent on both ends of the court, continually making the extra pass, leading to open shots, and sustaining their lockdown defense.

Riley provided the highlight when he grabbed an alley-oop pass from David Singleton and threw down a dunk after Singleton escaped the Wildcats’ pressure. Abilene Christian finally forced two turnovers in succession a few minutes later, but the deficit was just too great by that point.

UCLA avoided the flurry of turnovers that had worried Cronin, not committing its first until nearly nine minutes into the first half when guard Jules Bernard stepped out of bounds.

The Bruins had already commenced an 18-0 run by then during which they exploited their advantages in interior size and toughness. When UCLA’s Jaylen Clark reached out one of his long arms to snag a rebound before going in for a putback, the Bruins held a 26-12 lead and the Wildcats were forced to call timeout as pockets of fans howled “U-C-L-A!”

But the Bruins failed to put the game away after holding Abilene Christian scoreless for nine minutes, forcing jump shots and failing to make them. UCLA went more than five minutes without a point as the Wildcats went on a 7-0 push to shave the Bruins’ advantage to 26-19.

The Bruins were up 31-21 at the game’s midpoint largely because they had held Abilene Christian to 27% shooting and committed two fewer turnovers than the Wildcats. Each of UCLA’s three turnovers were unforced, with Jake Kyman also stepping out of bounds and Cody Riley bowling over a defender for a charge.

As the Bruins ran back onto the court before the second half, Freddie Mercury’s “Don’t Stop Me Now” blared over the loudspeakers. They were still going after the final buzzer, not intending to put an end to this fun run anytime soon.