Ohio Bobcats fall to Creighton in NCAA Tournament second round 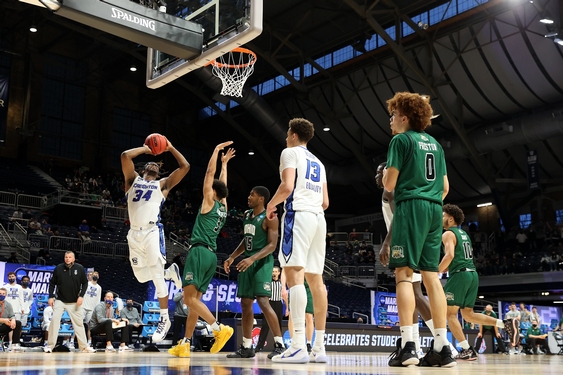 The Ohio men’s basketball team’s bid to reach the Sweet 16 for the first time in nearly a decade ended with a 72-58 loss to Creighton on Monday night in Indianapolis.

The 13th-seeded Bobcats were eliminated two days after a stunning first-round upset of fourth-seeded Virginia, the reigning national champion.

Their top scorers struggled against the fifth-seeded Bluejays as star guard Jason Preston and forward Ben Vander combined for 13 points on 4-of-22 shooting.

Preston, who was only two assists shy of finishing with a triple-double in the opening-round win, did not score a basket until almost midway through the second half.

All five of Creighton's starters finished in double-figure scoring, led by guard Marcus Zegarowski, who had a team-high 20 points.

A bulk of the Bluejays’ points came around the basket, taking advantage of the Bobcats’ limitations in the frontcourt. Thirty-four points, nearly half of their final total, came in the paint.

While Ohio held a narrow lead for most of the early minutes of the contest, Ohio fell behind late in the first half.

After Preston made the second of a pair of free-throw attempts with 7:19 left until in the half, giving the Bobcats a 20-19 lead, the edge unraveled.

Creighton launched a 20-4 run to build a 39-24 lead before the teams headed to the locker room for halftime.

For most of the second half, the Bobcats trailed by double-digits, only briefly cutting the margin to nine points with 2:26 left.