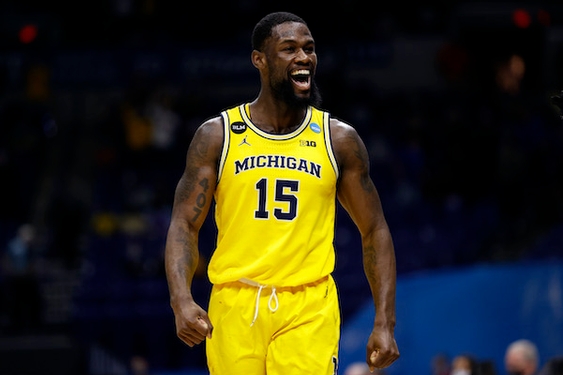 Chaundee Brown #15 of the Michigan Wolverines reacts to beating the LSU Tigers in the second round game of the 2021 NCAA Men's Basketball Tournament at Lucas Oil Stadium.

One by one, all the top Big Ten teams were sent packing and handed an early exit in the NCAA Tournament.

Top-seeded Michigan? The Wolverines bucked the trend by overcoming a slow start, a hot-shooting performance and foul trouble to make the second weekend with an 86-78 victory over No. 8 LSU Monday at Lucas Oil Stadium.

Michigan advances to the Sweet 16 for the fourth consecutive tournament and will face the winner of No. 4 Florida State and No. 5 Colorado on Sunday. Tip-off time and venue will be announced Sunday night.

After Michigan appeared to find its footing late in the first half, it stumbled out of the break. Over the first four minutes, the Wolverines picked five fouls — two apiece on Dickinson and Wagner — had a turnover and made just one shot. LSU took advantage of the stretch with an 8-0 spurt to pull ahead, 51-45, setting the stage for a half full of haymakers.

Michigan shook off the brutal start with a 10-0 burst to go back on top. Grad transfer guard Mike Smith and Brooks buried back-to-back 3s. Junior forward Brandon Johns Jr. made two free throws. Brown threw down a dunk to make it 55-51 at the 13:17 mark.

With Dickinson and Johns on the bench, LSU swung back with a 12-3 flurry fueled by Smart and Thomas that started with a string of seven straight points. After Brooks briefly quelled things with a 3-pointer, Thomas responded with a deep ball of his own to give the Tigers a 63-58 lead with 10:48 to go.

The Wolverines took that punch, got back up and countered with a 14-1 run. Brown provided the jolt and took over, scoring 12 points — six free throws and two 3-pointers — as Michigan regained a 72-64 lead at the 5:57 mark.

LSU pulled within six before Wagner came to life in crunch time and essentially put the game out of reach. He scored on a swooping layup, drained a 3-pointer, threw down a fast-break dunk and converted a second-chance layup to push it to 84-74 with 2:07 remaining before getting a key defensive stop in the final minute to seal it.

LSU’s high-scoring offense was as good as advertised as Thomas displayed incredible shot-making and got off to a blistering start. Meanwhile, Michigan struggled to take advantage of its size with freshman center Hunter Dickinson being doubled in the post and had a tough time knocking down looks from deep in the early stages.

That recipe led to an 15-7 deficit with 14:16 left in the first half as Thomas shot over Michigan’s guards in one-on-one situations and buried his first four attempts, including a contested step-back 3-pointer late in the shot clock.

As Thomas continued to pile up the points, the Wolverines didn’t blink or lose their composure. Instead, they relied on the playmaking and scoring of Brooks to weather the frantic storm and keep the Tigers from running away. After LSU took a nine-point lead, Brooks found Brown for a 3-pointer and Dickinson for a three-point play on back-to-back possessions to cut it to 30-27 at the 6:43 mark.

Down the stretch, Michigan’s length began to bother LSU as the Wolverines’ defense arrived and they began to assert themselves inside. Michigan closed the half on a 14-6 run and held LSU to one made field goal over the final four minutes to take a 43-42 edge into the break.