FSU cruises past Colorado to return to Sweet 16 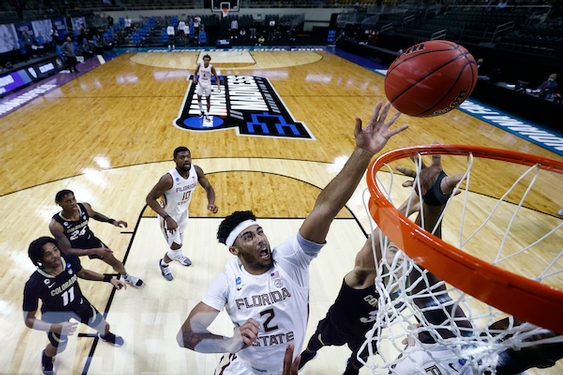 Anthony Polite #2 of the Florida State Seminoles drives to the basket during the second half against the Colorado Buffaloes in the second round game of the 2021 NCAA Men's Basketball Tournament.

It wasn’t pretty at times but Florida State used a career-night from Anthony Polite to power the fourth-seeded Seminoles to a 71-53 win in Indianapolis over No. 5 Colorado Monday and into the Sweet 16 for the third consecutive time.

It’s been a topsy-turvy year for the NCAA Tournament, with nine double-digit-seeded teams advancing into the second round. Three of those teams have already moved on to the regional semifinals, including No. 15 Oral Roberts, No. 12 Oregon State and No. 11 Syracuse.

The 6-foot-6 Polite finished with 22 points, five rebounds and four assists as the Seminoles survived some early turnovers before grabbing the lead midway through the first half on their way to an 18-point victory.

But it was the defense that helped carried FSU to the win.

“That’s something we harp on pretty much every day. Defense, defense. Defense wins championships,” said Polite. “They still did a great job but it was more difficult for them to find shots.”

“I’m so proud of Anthony; he had the shoulder injury during the middle of the season so we’ve been limping around a bit and it’s thrown us off our shooting schemes. I’m hoping a little time off now, we’ll get to shooting the ball like we did during the season.”

Balsa Koprivica picked up a quick foul a minute into the game, sending the sophomore center to the bench with freshman Tanor Ngom taking his place in the lineup. Koprivica re-entered the game at the 13:44 mark but found himself back on the bench after picking up his second foul two minutes later.

FSU turned the ball over seven times through the first 10 minutes of play before settling down for the remainder of the half.

The Seminoles connected on three early 3-pointers — two by Polite — to jump out to a 9-5 early lead over the Buffaloes. It was a much different feeling than the team’s first-round game against UNC Greensboro in which they went scoreless from behind the 3-point arc for the first time since 2018.

Colorado retook the lead at the 11:27 mark but then went ice cold from the floor, missing nine of its next 10 shots during a nine-minute stretch while turning the ball over seven times.

M.J. Walker and Scottie Barnes continued their offensive struggles in the tournament, going scoreless through the first 20 minutes of play. But the pair picked things up in the second half with 13 combined points along with eight assists and four steals.

FSU held UNC Greensboro to 31% shooting in its first-round matchup, including 27.6% in the second half. The Seminoles came into the tournament as one of the best defensive teams in the ACC, allowing teams to shoot just 39.4% on the season.

Two days after making 16 3-pointer in its first-round win over Georgetown, Colorado struggled to find its shot. The Buffaloes shot 36% on the evening but were 6-of-25 (24%) from behind the 3-point arc.

Colorado guard McKinley Wright IV, a three-time all-Pac-12 performer, struggled most of the night. The senior had four points and four rebounds with three turnovers in the first half. Things didn’t get much better in the second half as he picked up two quick fouls that sent him to the bench with three fouls for more than seven minutes.

Wright picked up his fourth foul with 8:26 left in the game trying to defend a Koprivica dunk. He finished with 10 points on 4-of-12 shooting on the night.

Polite said the goal was to be as disruptive as possible on the defensive side of the ball against Wright.

“He’s one of the best point guards on the West Coast,” said Polite. “We tried to keep the ball away from him and frustrate him and that’s what we did tonight.”