No. 10 Maryland men’s basketball can’t keep up with #2 Alabama, is eliminated from NCAA tournament. 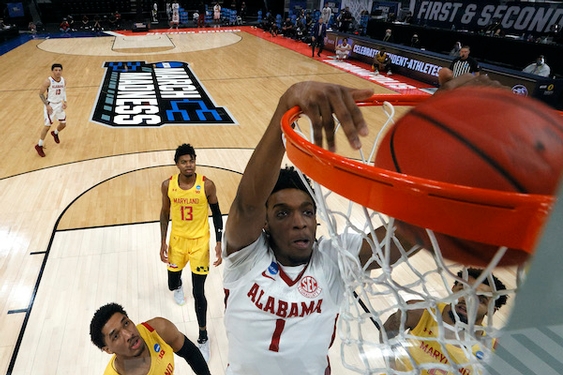 Herbert Jones #1 of the Alabama Crimson Tide dunks in the first half against the Maryland Terrapins in the second round game of the 2021 NCAA Men's Basketball Tournament.

As the second-seeded Alabama men’s basketball team drained 3-pointer after 3-pointer early in the second half, the limited crowd at Bankers Life Fieldhouse felt more like the pro-Crimson Tide crowd it appeared to be, with “Roll Tide” and all sorts of chants filling the arena.

Maryland coach Mark Turgeon said after his team’s Round of 64 win over Connecticut that his players had overachieved in a season in which the Terps were picked to finish in the bottom half of the Big Ten Conference.

And it looked that way on Monday night, as 10th-seeded Maryland bowed out of the NCAA tournament to a team that Turgeon called the “fifth No. 1 seed” in the 68-team field.

Maryland’s season ended in the Round of 32 in a 96-77 loss to Alabama in Indianapolis.

Alabama, which shoots the most 3-pointers in the country, made 16 of 33 attempts from long range. Maryland shot 53% from the field and made 10 of 27 3-point attempts but couldn’t keep up with a team that averages close to 80 points per game.

The Terps looked to be riding their confidence early, making seven straight shot attempts to take an 18-12 lead six minutes into the game.

But Turgeon, who has utilized an eight-man rotation for the duration of the season, brought all three of his subs — Galin Smith, Jairus Hamilton and Reese Mona — in for Darryl Morsell, Donta Scott and Hakim Hart at the 13:00 mark.

Maryland looked disjointed in the new lineup as Alabama went on a 15-4 run to take a 27-22 lead. Turgeon subsequently called timeout and reinserted his starters, but the Crimson Tide had already seized control. Alabama led by as many as 11 in the first half and led 46-38 at halftime, making eight of 17 attempts from beyond the 3-point line in the first half. Maryland was not far behind in the first 20 minutes, shooting 50% from the field and six of 17 on 3-pointers.

A 17-2 run in just three minutes pushed Alabama’s lead to 23, 65-42, its largest of the game, as each long-range shot seemed to sap more of Maryland’s energy. The Terps’ deficit never dropped below 16 as an equally athletic and deeper team outmanned a rotation that was mainly limited to six players — the starters and Hamilton — in the second half.