Kansas Jayhawks knocked out of NCAA Tournament by USC Trojans 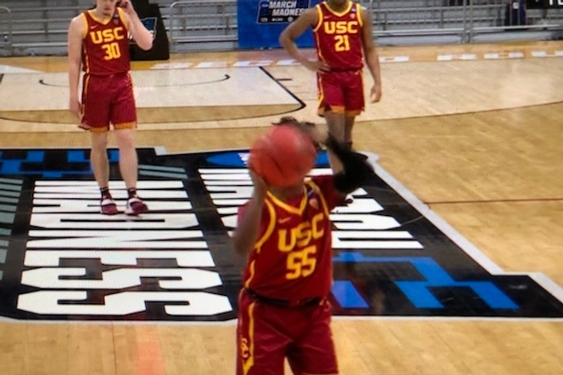 Kansas’ stay in the NCAA bubble will be a short one.

The No. 6-seeded USC Trojans of the Pac-12 Conference rolled to a 19-point halftime lead en route to an historic 85-51 rout of the No. 3-seed Jayhawks in a second-round NCAA Tournament West Regional game on Monday at Hinkle Fieldhouse in Indianapolis.

The 34-point loss is Kansas’ worst in NCAA Tournament history. KU’s previous worst loss was by 18 points to Indiana back in 1940.

It was also KU’s worst loss in the Bill Self era, surpassing a 32-point defeat to Kentucky during the 2013-14 season.

Isaiah Mobley scored 17 points and brother Evan added 10 points (with 13 boards) for the Trojans, who advanced to a Sweet 16 game against Oregon on Sunday.

Marcus Garrett, who had foul problems, scored 15 points for KU (21-9), which had defeated Eastern Washington in a first-round contest on Saturday prior to Monday’s defeat on Butler University’s campus.

KU junior Ochai Agbaji had an especially rough night. He hit 3 of 13 shots and scored eight points. KU as a team hit 29% of its shots and was 6 of 25 from three.

Jalen Wilson, who arrived in Indy on Monday morning after a week-long COVID-19 quarantine, played just five minutes the first half and did not score. He had two points total in eight minutes. Garrett led KU with seven points. KU hit 25.8% of its shots in the half. The Jayhawks were 3 of 11 from three.