Anthony Mackie: Crossing Over to the Hollywood A-List 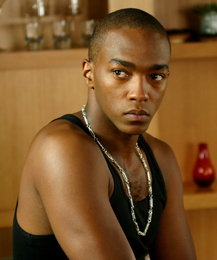 Although Anthony Mackie might still be new to the scene, his resume is already the envy of much of young Hollywood. Not only has the New Orleans native shared the big screen with such legends as Harrison Ford ( Hollywood Homicide ) and Clint Eastwood ( Million Dollar Baby ), but he's also made a name for himself onstage alongside such great performers as Taye Diggs, Whoopi Goldberg and Charles S. Dutton. While there's no doubt the Juilliard-trained actor is destined to become one of Hollywood's newest leading men, whether or not he's marketable to moviegoers remains to be seen.

Enter Crossover , a gripping urban drama set against the thrilling world of streetball. The story follows two young hopefuls, Tech (Mackie) and Noah (Wesley Jonathan), who must bring every move they have to the court to unseat the reigning champions from the throne. While the role might seem like a drastic departure for the sophisticated Mackie, surprisingly, the young star says he found a lot of similarities between himself and his onscreen counterpart.

“ Crossover tells the story of two kids makin' it out of the hood by playing ball,” Mackie says. “For them, streetball is a means to an end. For me, acting is the means to an end, and the business is just as fickle as streetball – you do what you can to blossom and then you move on. Tech realizes this, that streetball is a career that's short-lived. Once it's over, then what? You need an education to fall back on.”

While Mackie had no problems relating to his character, he does admit he had issues holding his own on the court when the cameras were rolling. Mackie would find himself practicing his game for four hours before and after each shoot just so audiences would believe he could possibly compete with his onscreen rival Jewelz, played by former member of the And 1 streetball team Phillip “Hot Sauce” Champion.

“There's no acting when I'm playin' ball – I'm just trying to survive,” states Mackie with a laugh. “I was out there playing with some of the best streetball players in the world.”

Mackie admits he was very familiar with the underground sport before signing on to the movie. In fact, he had auditioned for The Rucker , a film about the raw and ferocious competitive basketball league in New York City, two years ago but didn't get the part. Determined not to be passed up the next time a great basketball film was being made, Mackie worked on getting into shape, running five miles a day in addition to doing cardio workouts.

“Really, all Crossover does is prove I should have been cast in The Rucker ,” Mackie jokes.

In all seriousness, though, David Vaccari, the casting director for The Rucker , probably realizes his mistake in not signing Mackie to his movie. After all, the rising star seems to be everywhere these days. Not only can audiences see him in Crossover , but he's also starring alongside Orlando Bloom and Bill Paxton in Haven beginning Sept. 15. Moviegoers can also catch him this December in McG's We Are Marshall , where Mackie plays the sole survivor of a university football team who works to keep the football program alive after a plane crash kills the rest of the team on the way to a game.

“It's a phenomenal story,” Mackie says. “Really, it's one of the best films of the year.”

With so much on his plate it's been hard for Mackie to make his return to the stage, but the actor says he's hoping to go back to New York sometime early next year to star in another production. For no matter how much success he finds in Hollywood, when it comes down to it, Mackie's really a stage actor at heart.

“I like the instant gratification that comes along with it,” he states. “You can be bad one night and make up for it the next. Plus, plays seem to live in legend. They become a part of history.”

But with a resume as impressive as his in only four short years, there's no doubt Anthony Mackie's going to become a legend no matter where he performs.