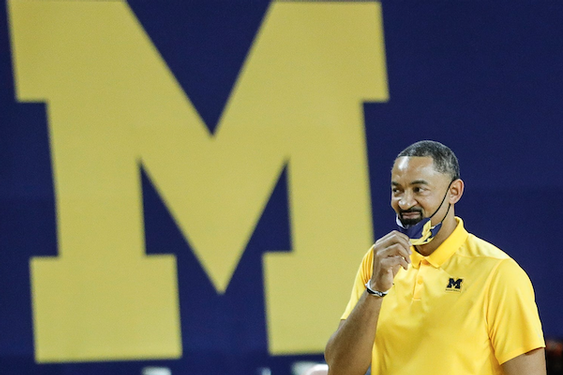 Michigan head coach Juwan Howard reacts a play against Minnesota during the second half at Crisler Center in Ann Arbor, Wednesday, Jan. 6, 2021.

They were down early against a super-athletic team that was refusing to miss shots. If the Michigan Wolverines were going to buckle as other top teams have, this was the time.

After Michigan dispatched feisty LSU, 86-78, Monday night, Juwan Howard looked exhausted, which was kind of the plan. “The motto for today was ‘empty the tank,’ ” he said with a laugh, and as it turns out, that was only part of it. Empty the bench. Empty the bag of adjustments. Empty the mind of nervous rumblings.

This is how it’s gonna be for however long this NCAA Tournament run goes, tight games against talented foes. It’s also why the top-seeded Wolverines are the last Big Ten team standing out of nine, and why they still have a championship shot. They’ll make their fourth straight Sweet 16 appearance and face No. 4 seed Florida State next Sunday at 5 p.m., also in Indianapolis, likely another taut tussle.

The Wolverines’ chances took an undeniable hit when they lost senior star Isaiah Livers to a foot injury, but they’re showing they can live without Livers, at least for a while. They have bodies waiting to be called on, and in this game, Livers’ normal contributions were spread everywhere. Michigan’s bench outscored LSU’s 26-2, while Tigers stars Cameron Thomas and Javonte Smart played all 40 minutes.

Chaundee Brown came in and hit huge shots, as Michigan wiped out a five-point deficit midway through the second half. The Wake Forest transfer finished with a season-high 21 points and hit three of six 3-pointers. He was the catalyst, except for early in the game, when Eli Brooks was the catalyst, making clutch plays when LSU threatened to pull away.

The Tigers were racing up and down the court, led by superb freshman guard Thomas, and led 30-21 before the Wolverines could catch their breath.

“We started attacking the basket,” Howard said. “We also got some stops. Yeah, LSU made some tough shots, some that were well-contested. That was easily where we could have put our head down, start to point the finger. Our guys kept grinding it, grinding it.”

The eighth-seeded Tigers may have been quicker and more athletic with Thomas (30 points) and Smart (27 points) but they couldn’t burn that hot all game. Not when Michigan can throw 7-footer Hunter Dickinson at them, and then, just when LSU might’ve figured the Wolverines’ tank was running low, here came Franz Wagner to light it up at the end. He scored nine points in a three-minute stretch, and suddenly a close game was broken open.

This was only the third full game without Livers, and adjustments continue. But the adaptability is evident, especially in Brooks, who has morphed from a defensive guy into a creator into a lethal shooter. He scored a career-high 21 points on seven-for-11 shooting and added seven assists.

“My shot is feeling as good as it has all year,” Brooks said. “I’ve said it since the beginning of the year, this is the deepest team I’ve ever been a part of. We have a lot of shooters and we have a post presence in Hunter and Austin (Davis). They draw a lot of attention, so you get a lot of open shots.”

And that’s not even the essence of this team. With Howard, it’s always defense, and that’s the reason the Wolverines might be able to withstand Livers’ absence. After the Tigers’ hot start, they finished 39% from the field, 29% on 3-pointers.

“I think the defense really sparked our pace and sparked our offense,” Brooks said. “To be honest, it was just about wearing on them, making everything tough. It was mostly just staying the course.”

So, no, don’t try to call Brown a defensive specialist. And don’t dare try to overlook Brooks, as well-rounded as any player on the team.

“He's a basketball guy, has a high IQ, very underrated in a lot of ways offensively and defensively,” Howard said. “At times he's looked at as being undersized, but that's why he has that chip. He can be a combo guard, at times he's our primary ball-handler, sometimes he's off the ball. Watch our games, you understand why we appreciate Eli and what he brings to the table night in and night out. He's our glue guy.”

The Wolverines will need plenty of glue, and paste, and energy to keep advancing. Florida State has another defense-minded team under Leonard Hamilton, with a bit more offense added in. The Seminoles (18-6) are the tallest team in the country, shoot a sterling 38% on 3s and have won eight of their last 11.

By beating Colorado, 71-53, Monday night, they advanced to the Sweet 16 for the third straight time.

Florida State reached the Elite Eight in 2018 and was eliminated by Michigan 58-54 in a grinding battle.

So yes, expect another slugfest, just don’t expect the Wolverines to look ahead or look back. Or even look sideways. They’re aware they’re the last Big Ten team alive, but that’s irrelevant to them as they sequester in Indianapolis for another week.

“At times if you listen to all the stuff that's out there being written, being said, it becomes a distraction,” Howard said. “But within our bubble, we keep it tight. We just stay locked in the moment, locked in the competition.”

They’re locked but not necessarily loaded without Livers, and the challenge only gets tougher. But they just might have more left in the tank, and more coming off the bench, than anyone realized.