Racist messages sent to Kofi Cockburn and E.J. Liddell are another reminder how far we still need to 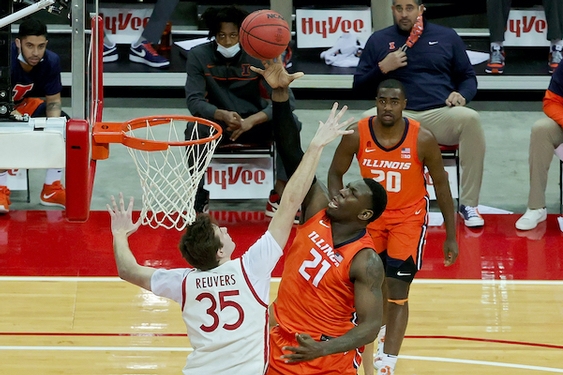 Illinois' Kofi Cockburn (21) attacks the rim against Wisconsin's Nate Reuvers (35) in the second half at the Kohl Center in Madison, Wisconsin, on Saturday, Feb. 27, 2021. (Dylan Buell/Getty Images/TN

As Loyola Chicago revealed itself as a national power, beating team after team, mail addressed to specific dorms and to specific players arrived.

The letters were threatening, written to Black players and signed by the Ku Klux Klan.

“I was (scared),” star guard Jerry Harkness told the Chicago Tribune in 2018. “It was addressed to the dorm on Sheridan Road. I started thinking, ‘These guys are talking like this and they know where we live.’ Wouldn’t you be a little nervous? ‘What else do they know? They could wait out there and ambush me.’ Yeah, I was afraid.”

In bloody, violent 1963 — a year before the Civil Rights Act passed — white fans were angry the Ramblers started four Black players, boldly ignoring an unwritten agreement limiting more than two Black players from the same team on the court together. Harkness and his teammates went on to win the national championship that same season.

Harkness was only 22 when he and his Loyola teammates opened those letters. He’s 80 now.

They also played in the NCAA Tournament — an achievement of a lifetime — and in 2021 were targeted with racist messages after their teams lost.

All that has changed is the method of communication: Stamped letters then. Social media posts now.

Cockburn and Liddell shared the messages on social media. It would be foolish to think other Black players haven’t received similar messages over the years.

Maybe that’s why Liddell and Cockburn publicly showcased the bigotry to turn the spotlight on the racists.

“Honestly, what did I do to deserve this? I’m human,” Liddell posted on social media. “Comments don’t get to me but I just wanna know why. I’ve never done anything to anyone in my life to be approached like this.”

Cockburn, who is from Jamaica, dismissed the racist and xenophobic message he received by captioning the post “I BLAME HIS PARENTS.”

It doesn’t matter if the people who sent the messages were fans of either players’ teams. Internet culture can’t solely take the blame either. Racism doesn’t exist because of social media, it just spreads the message faster than when Harkness was targeted.

Racism was woven into the founding of this country, and it has yet to be eradicated in every facet of American life, including sports.

From racist chants in soccer, to racial disparities in coaching ranks, to the lack of representation in media, sports culture needs to be part of this change. Athletes being reduced to unpaid commodities — denied of such basic principles as ownership of their names, images and likenesses — further perpetuates stereotypes through exploitation.

When Black athletes assert their humanity, calling for racial justice amid police shootings of unarmed Black men and women, they’re told to “shut up and dribble” or “stick to sports.”

Critics said this to Muhammad Ali, Tommie Smith and John Carlos. They say this to Serena Williams, LeBron James and Colin Kaepernick.

Jackie Robinson, lionized for breaking Major League Baseball’s color line, said fans cheered him when he succeeded while silently absorbing racism but hated him when he spoke out.

“The minute I began to sound off,” he said, according to the Washington Post, “I became a swellhead, wise guy, an ‘uppity’ (slur).”

During last summer’s Black Lives Matter protests, some white college administrators, coaches, teammates and fans joined in on campus marches to speak — some genuinely, some forced — against racism.

But some fans said they never would watch these teams again.

This season, Creighton’s coach was suspended for telling players to “stay on the plantation.” Penn State had an interim coach because its former coach lost his job after making reference to loosening a metaphorical noose around the neck of a Black player. In football, Oklahoma State’s coach was criticized by players for wearing the shirt of a television network that propagates racism.

Clearly, more needs to change in sports — and society.

Ohio State was right to report Liddell’s identified harasser to police. Illinois is looking into the messages, a school spokesman told the Tribune on Monday night.

There is joy this March to be sure, the thrilling upsets are a welcome reprieve from an unprecedented year of loneliness. But this season’s tournament also has been notable for revealing the omnipresent ugly side of sports.

Women playing in the NCAA Tournament in San Antonio shared gender inequities by posting photos on social media of their inadequate weight rooms and meals compared to the elaborate amenities provided for the men’s tournament.

COVID-19 knocked out VCU from the tournament and sent home several officials, reminding deniers and downplayers the pandemic isn’t over even as a treasured sports tradition carried on to emphasize normalcy — and generate revenue.

And, of course, the harmful messages sent to Cockburn and Liddell surfaced.

It was only about a week ago, Cockburn helped provide one of the most joyous moments of the season. He made giggling contagious during a news conference with Giorgi Bezhanishvili, a white teammate from the republic of Georgia.

Bezhanishvili slung his arm around Cockburn, his roommate, and repeatedly referred to their “amazing” Big Ten tournament championship. Cockburn shook his head as Bezhanshivili nearly sung the word “amazing” nine times in his first answer alone.

With a wide grin, Cockburn echoed back, “Amazing.”

Amid the levity, Bezhanishvili explained their bond.

“We have so many conversations even at our apartment,” he said. “We have so many conversations about our families, our journeys. You know, he’s telling me a lot about his country, his family, his culture. I’m doing the same thing. In practice we go at each other. And sometimes, you know, we have almost fought a couple of times, but we know we’re not going to hit each other. It’s all competing, and it’s all making each other better.”

Cockburn took his turn to explain the wonder of competition. Despite differences — born a world apart, belonging to different identities and growing up with distinct cultures — he discussed how sports can be a bridge.

“Sports brings people together because when you have a love for a certain sport, you dedicate most of your life to that sport,” Cockburn said in his typical earnestness. “Sports becomes a part of you. And you know, when you share that sport with somebody else that has that same feeling about it, it’s an automatic connection that’s created right there.”