Ohio State's E.J. Liddell on threats and hateful messages: 'I have feelings, too' 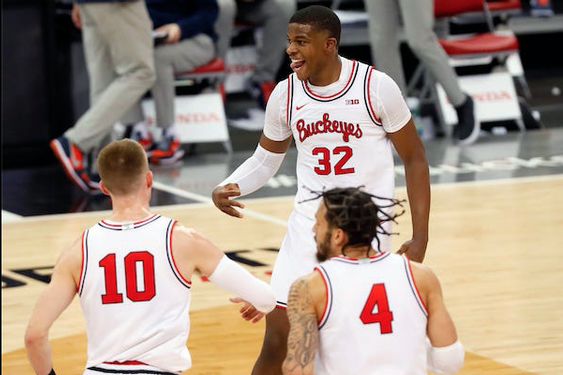 If E.J. Liddell and his Ohio State men’s basketball teammates wanted any semblance of a social life this year, it began and ended with their phones.

Living in what essentially amounted to isolation with basketball their only real outlet, the Buckeyes dealt with daily COVID-19 testing, recommended social distancing measures and the constant worry that one selfish act could result in the shutting down of the program.

Want to talk to your friends who aren’t on the team? Time to pull out the cell phone. Want to see your family for the first time since October? Fire up the phone for a video chat. Want to have any idea what’s happening outside of the bubble that was the 2020-21 Buckeyes? Start scrolling social media.

That lifeline to the outside world came with a dark side, though, and Liddell shined a 100-megawatt spotlight on it in the aftermath of a shocking, season-ending loss to No. 15 seed Oral Roberts in the first round of the NCAA Tournament last Friday.

As the Buckeyes’ bus drove from Purdue’s Mackey Arena to their team hotel in Indianapolis, Liddell closed his eyes, put his AirPods in his ears and listened to music while feeling the sting of the loss.

Then, when Ohio State had pointed eastward on I-70 sometime around midnight, he fired up his social media accounts and saw plenty of good but also some stunningly awful comments that were too much to ignore. On Wednesday, four days after he shared those messages with the world, Liddell spoke about the experience.

“I’m not the only one going through things like this,” he told reporters. “It’s better to use my voice than to stay quiet all the time. I can take criticism, people telling me I suck and things, but I just used my voice and I feel like (with) a lot of other athletes using their voices this (harassment) is going to slow down and in the future go to an end.”

Since Liddell went public with the messages, he has received an outpouring of support from across the sports spectrum. Within the Big Ten, Liddell said he’d heard from Trevion Williams of Purdue, Rocket Watts and Malik Hall of Michigan State and D’Mitrik Trice of Wisconsin.

Like them, Liddell said this is far from the first time he’s dealt with online criticism. He said it started when he was a senior in high school and making a name for himself as a high-level recruit.

“It definitely bothered me a little bit because I go out there and put a smile on my face every game, ready to play basketball,” he said. “For people to feel so ill about me about a couple turnovers or a missed one-and-one free throw, it just doesn’t sit right with me because I have feelings, too.”

An investigation is ongoing into the messages, and Liddell said he didn’t have an update on where that stands. During a radio appearance on WLVQ-FM on Wednesday, Ohio State coach Chris Holtmann said campus law enforcement is looking at the matter, that there will be “potentially some resolution to it” and that authorities have “zeroed in on one of the guys, for sure.”

Asked if he’d like to be part of the prosecution should the perpetrators be apprehended, Liddell said, “Not really. I’m trying not to think about it.”

Then there’s the timing of it all. In the loss to the Golden Eagles, Liddell finished with 23 points and 14 rebounds to lead the Buckeyes in both categories but also had five turnovers. It was a bitter end to a season that saw Liddell become the first OSU player in three years to earn first-team all-Big Ten honors, and one that saw him and his teammates battle through a pandemic just to be on the court.

“When a season ends you don’t need to hear negative comments, especially not threatening comments,” he said. “I’d rather people see us like humans and pick us up, because we sacrificed so much for this season ... really lost our social lives during the season.

“I definitely don’t think people really see how much we gave up. We were hesitant about everything — going to the mall, food court, had to stay away from people and get away from life honestly, just for us to sacrifice and play basketball and this thing we love. I don’t regret anything.”