The NCAA women's tournament landed in the spotlight for inequity 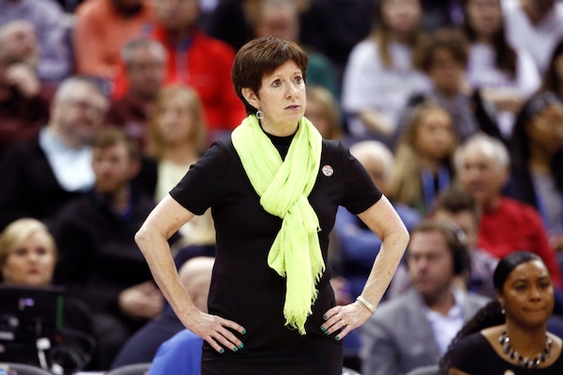 Head coach Muffet McGraw of the Notre Dame reacts to her team against the Mississippi State Lady Bulldogs during the 2nd quarter in the championship game of the 2018 NCAA Women's Final 4.

If the NCAA, the national governing body of college sports, is being accused of a failure to notice how the sport of women's basketball is being treated shabbily at the very moment all aspects of the sport should be celebrated, that's a failure of leadership.

The good news for the NCAA: There are all sorts of leaders, right there under your nose. Maybe bring Muffet McGraw, one of college sports' greatest leaders, back inside the tent. The retired Notre Dame coach is identifying problems. Ask her for a little help fixing them.

At the least, ask her advice.

"I think what they need is sort of an internal review," McGraw said Monday over the phone. "But they need to do it from conference commissioners, and university presidents. The membership needs to be involved. They need to figure out — what are we doing wrong here?"

When a video went viral of the difference in workout equipment between the men's bubble in Indianapolis and the women's version in San Antonio, some floodgates opened. Dawn Staley and others with influence weighed in expressing dismay and disgust.

Last week, I asked a men's sports administrator if hoop teams have time at this point in the season to use workout equipment, whether this was more than a surface issue. The answer, absolutely, yes, the equipment is important.

Not a made-up issue at all, agreed Drexel coach Amy Mallon. The first time Mallon saw the workout area available to her Dragons in San Antonio, she saw "dumbbells and like five yoga mats."

The attention placed pressure on the NCAA and increased when Dick's and other sporting goods manufacturers offered to bring in equipment for free. Suddenly, space wasn't an issue, since it was never an issue.

If you think the NCAA hierarchy wasn't aware in advance of the optics of such a difference, we've got a bridge to sell you.

"An apology is not enough," McGraw said of these inequities raised over the past week.

Yes, the women know that the men's tournament is where the money is, that the TV deal is worth almost $1 billion, while women's tournament revenue doesn't make it back to the schools at all.

Drexel proved Monday it deserved its place in March Madness ... oops, that term is for the men. (We'll get to that.) The Dragons, 14th-seeded after winning the Colonial Athletic Association, led by a terrific point guard in Hannah Nihill, had a lead after a quarter against 3rd-seeded Georgia, and it was still tied at halftime and close after three quarters before the Bulldogs pulled away for a 67-53 final.

If the NCAA wants to study how gender equity is done at a place such as Drexel, Mallon would be happy to help make it happen. She believes her school pays far more than lip service to the issue, that it takes pride in once being deemed best in Division I on gender equity. Mallon was able to stay around as an assistant coach before being named to replace Denise Dillon, instead of going after a number of head-coaching jobs, because she was compensated enough to be able to stay.

Mallon notes that she's never seen her program treated differently than Drexel's men's program. You could argue that's easier when there is not a crazy amount of revenue coming in. Or you could say it's harder. Mallon said when the men get a guaranteed amount of money for a road game, the money goes to the athletic department, and the women get a share of that benefit. She brings up that point herself.

That weight equipment magically showing up was symbolic.

"I try to explain to our student-athletes, we sit down. 'This is a business. The amount of money they make off the tournament — things like weights are simple,' " Mallon said. "You have to continue to fight for change. As a female, I feel like we always have to fight for what we get. That's also WHY you get what you get."

McGraw isn't done with the fight. She'd put out a statement over the weekend, pulling zero punches, saying time's up.

"While I appreciate the outrage, the fact that there's a huge disparity between men's and women's sports is hardly breaking news," McGraw began the statement. "We have been fighting this battle for years and frankly I'm tired of it.",

Symbols are part of this. The Drexel game began Monday and the announcer on ESPN2 intoned, "Tap controlled by the Georgia Lady Bulldogs."

The NCAA apparently takes it much further, and by not dealing with the health and safety issues squarely, the governing body has opened the door to greater scrutiny. The Wall Street Journal published a story Monday on how the NCAA intentionally didn't allow the women's tournament to use the term "March Madness," which seemingly is on every chair and basket stanchion on the men's side, in addition to being plastered across halfcourt so TV audiences know what they're watching with every change of possession.

Initially, the Journal reported, the NCAA had sent a statement noting the "women's basketball leadership at that time chose to pursue their own identity." That part of the statement was later retracted. There's nothing preventing the NCAA from spreading some Madness. What would that hurt? Dilute the brand by including the women? Let's ask: What kind of brand is that?

Any honest broker would tell you these are some complex issues, especially given the dollars involved, and the fact that plenty of the men competing believe they're entitled to a real slice of the big men's tournament revenue. All such issues lead to other issues. But if health and safety issues are in the same buckets as dollar and cents issues, problems inevitably arise, whether or not you're supposed to be in the higher education business.

Let's add, since this is all big business, erring on the side of not embarrassing yourself is generally good business.