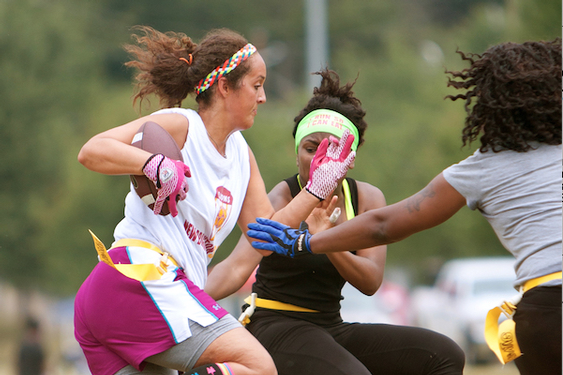 On the surface, growing the sport of football doesn't seem high on a list of concerns.

It's consistently ranked as the most popular sport in America and its presence is felt around the world.

But after the first 100 years of the National Football League, continuing to expand the reach of the sport and supporting its longevity are priorities for the league. An often-overlooked component of that is giving women increased avenues to actually play the game.

In a step toward giving women even more opportunities to play football, the Charlotte-based National Junior College Athletic Association (NJCAA) has announced women's flag football as an emerging sport in a joint effort with the NFL and Reigning Champs Experience (RCX).

"The future of our sport really depends on just participants. And if you play, you're more likely to let your kids play or you're more likely to be a fan, you are more likely to support your school, your team," Roman Oben, NFL Vice President of Football Development, told The Charlotte Observer. "They should still be able to play and define football in their own way, male or female, and so we want to just narrow that gap in between male and female participants, but we also just want to give a path and give an opportunity."

The NFL will provide a $150,000 grant to the NJCAA Foundation for distribution to NJCAA member colleges that declare their intent to participate in the sport over the next two years. The NJCAA Foundation, along with the NFL and RCX, will award $10,000 grants to 15 member colleges to move the initiative from an emerging sport to a full championship sport over the next few years.

The NFL and RCX first brought women's flag football to the collegiate level last year, assisting the National Association of Intercollegiate Athletics (NAIA) in classifying it as an emerging sport. Those schools have kicked off games this spring.

Thirty NJCAA programs have already committed to adding women's flag football, and more than 60 are expected in the second year. The NJCAA is the second-largest national intercollegiate athletic organization in the United States, behind the NCAA, with more than 500 member schools in 44 states. In general, Division I NJCAA colleges are able to offer full sports. scholarships.

The intent is to begin play as soon as Spring 2022. Emerging sports reaching a full championship level can take three-to-five years. An emerging sport does not get a national championship event at the conclusion of the season and requires a higher level of schools to be participating. Creating guidelines and a competition structure are just a portion of the years of behind-the-scenes work that goes into introducing a new sport to a collegiate association.

"Our athletes are not entirely unaccustomed to starting out just playing a new sport at the two-year level that they may not have had an opportunity to engage with prior to, so it's that synergy I think between the athletes who are in the programs now, who will now have this opportunity," Molly Simons, NJCAA Vice President for Championships, Governance & Membership said. " ... Not only for the student-athletes who are participating but the leadership opportunities for coaches or support staff of these programs that we haven't had as much opportunity on the traditional football side."

NFL FLAG has more than 1,600 locally operated leagues and over 500,000 youth athletes across all 50 states for boys and girls ages 5-17. By continuing to grow the support on the collegiate level, more athletes will have the opportunity to play at the next level or those who may not have previously had access will be able to play for the first time.

"There's obviously been some decline in tackle (football) at the youth end, but there's been an increase in flag, and we don't look at tackle and flag as two separate sports. We look at it as football engagement," Oben said. "When you look at the female growth, what's already been done in states like Florida, where they're playing in high school, but there hasn't been a through path after that. ... I think the partnership with the NJCAA is also the next step in that growth of the game."

The hopes for the stages the sport can reach going forward are high as it continues to progress up the collegiate level. Flag football will be part of the World Games for the first time in 2022. The games will take place in Birmingham, Ala., featuring eight men's teams and eight women's teams from around the world, further increasing exposure of the game.

Oben pointed to the examples that Mia Hamm gave young girls to play soccer and the Williams sisters to start playing tennis. By giving women more of a platform to play flag football, he said, hopefully it will influence younger girls to get into the sport, as well.

"I hope to some degree this can create that same inspiration when you have a lot of females and starting in high school, going through college, that want to continue to play this sport," Oben said.

Despite the financial hardships many college athletic programs around the country are dealing with due to COVID-19, enough member schools in the NJCAA wanted to get behind women's flag football to take the next step.

"I can't let it sound cliche, but we're so excited because these are opportunities, I mean direct opportunities for students to get an education," Simons said. "We know how exciting it is to wear our team name on our back or represent an institution, be able to engage.

"Getting students started, who may not have known if college was for them or maybe after two years, it is a four-year degree that they can pursue or they're ready to go with a technical program or certificates and enter the workforce."