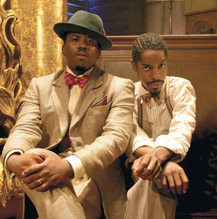 OutKast's wildly ambitious Prohibition-era musical, is a mess, but an energetic, convivial mess: Even when it's not working, the movie exudes a peculiar charm that is one-third inventiveness and two-thirds seat-of-your-pants chutzpah.

The brainchild of OutKast's Andre Benjamin and Antwan A. Patton and music-video director Bryan Barber, Idlewild revolves around a speakeasy/brothel in 1935 Georgia, where lifelong friends Percival (Benjamin) and Rooster (Patton) perform to boisterous, besotted crowds.

The musical numbers at the club, of which there aren't nearly enough, are the film's undisputed highlights, ingeniously melding '30s-style jazz, swing and blues with contemporary R&B and hip hop, and beautifully choreographed and edited at a snappy MTV-tempo.

More Moulin Rouge than The Cotton Club , Idlewild isn't so much concerned with paying homage to the music of the period as it is in sampling and reinventing it to create something distinctly new. The same can be said of the movie's period setting, which is used primarily as an excuse for visual oomph (the costuming and set design are outstanding), with little attention paid to the historical and cultural context of its all-black cast of upper middle-class characters.

Idlewild's main objective is simply to put on a good show. Barber sets the tone during an outstanding opening-credits sequence depicting Percival and Rooster's childhood, then keeps things light and fizzy, liberally sprinkling animation and fantasy sequences into the mix. The result is a movie that never seems to take itself too seriously, even when violence breaks out and bodies pile up.

Curiously kept apart for much of the movie, Benjamin and Patton both fare well, although Benjamin, stuck in the mopey role of a mortician's son who secretly aspires to become a pianist, isn't as much fun to watch as Patton's womanizing bootlegger.

Supporting turns by Terrence Howard as a junkyard-mean gangster and Paula Patton as a stage-shy singer are both excellent, and the film is peppered by brief but memorable appearances from famous faces, including Patti LaBelle as an egomaniacal songstress, Macy Gray as a hilariously nervy performer and Faizon Love as an overly cocky club manager. Other cameos, like fleeting bits by Cicely Tyson and Ben Vereen, come off merely as casting stunts.

Idlewild sat on a shelf for more than a year while Universal figured out the best way to market the movie, and the decision to release the film at the tail end of summer implies a lack of confidence on the studio's part. Uneven and episodic to a fault, the movie is, indeed, a problem child. But there's something irresistibly precocious about it, too. Idlewild doesn't exactly hang together, but its parts are something to behold.