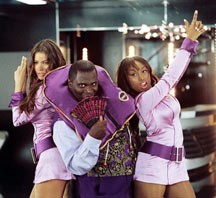 What happens when a brotha’ wins a $100 million settlement from an airline that did him wrong? He takes that money and creates the airline of his dreams. In a film that’s basically Airplane meets Boyz N the Hood, Nashawn (comedian Kevin Hart) forms NWA airlines, whose motto is, "We Fly, We Party, We Land." This tricked-out ride has an Xbox in the cockpit and wheels with 82-inch dubs and hydraulics. Nashawn spends so much money perfecting first class that he barely scrapes by in giving a little something to business class, and cuts a lot of corners in coach. First-class passengers can eat all the lobster they want and drink bottles of Cristal champagne until it’s gone, while the folks in the lower classes settle for Colt 45 and Popeye’s chicken straight from the box.

When the pilot is a no-show, his cousin Muggsy (rapper Method Man) comes to his rescue with Captain Mack (Snoop Dogg). Captain Mack calmly takes helm of the wheel in between puffs of his favorite herb and gives his co-pilot a hard time. Never mind the fact that Captain Mack has had barely over 200 hours of flying time and is afraid of heights — this undoubtedly is a ride the passengers will never forget.

Rounding out the urban comedy are funny woman Mo’Nique as the security attendant who spends way too much time talking to her girl Shaniece; D.L. Hughley, the bathroom attendant aboard NWA; and Tom Arnold, as Mr. Hunkee, who is placed on NWA after his earlier reservation is cancelled.

Soul Plane marks the feature film debut for music video director Jessy Terrero, who brings to the screen situations that an audience can easily relate to and get lost in for a couple of hours. Soul Plane is lively, hot and, most importantly, very funny. Hop onboard and let Captain Mack take you on the flight of your life.