Confused by all those streaming services? This app is here to help 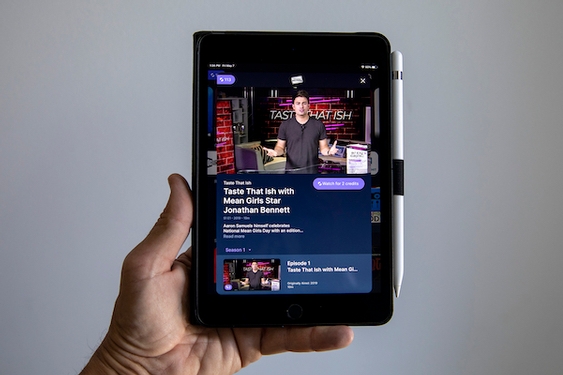 With the new app Struum, users can purchase credits to watch individuals shows that appear on one of the many channels available in the app. (Jay L. Clendenin/Los Angeles Times/TNS)

With the growing number of streaming services, viewers have an unprecedented level of choice over what they want to watch. But they also face the daunting task of keeping all those services straight. Not to mention the growing cost.

A cadre of former Disney and Discovery executives has proposed a solution to help relieve streaming overload.

Their upcoming app, Struum (pronounced "stroom," which is "stream" in Dutch), uses a credit-based system similar to the fitness app ClassPass to let subscribers access shows and movies from dozens of niche streaming services.

The Los Angeles-based company, backed by former Walt Disney Co. Chief Executive Michael Eisner's Tornante Co., has finalized deals to feature content from more than 50 smaller streaming services, studios and programmers. For a monthly fee, users get access to programming from providers including BBC Select, Tribeca, Magnolia Pictures, Cheddar, Indieflix, Filmbox, Cinedigm, Docurama and Revolt in one place, rather than by jumping from app to app.

Struum this month is expected to launch its app through the iOS app store, the web, and Google's Chromecast, with content from about 25 initial partners. The app organizes content from multiple providers by categories, such as "indie hits," "stranger than fiction" and "true crime." Struum will also make recommendations across programmers based on users' activity.

"For the consumer, it's so hard to find things," said Chief Executive Lauren DeVillier, a former Discovery Ventures and Disney/ABC TV Group executive who cofounded the company with Paul Pastor, Eugene Liew and Thomas Wadsworth. "Everything's so disaggregated. We're sort of re-bundling for consumers. Our goal is to say, 'You really love cooking? Here are 10 different services that are going to conquer it for you.'"

Struum, founded in April 2020, is far from the first company to notice that consumers need help organizing their streaming lives. More than half of consumers said in a recent Deloitte survey that they are frustrated that they need multiple subscriptions to access the content they want to watch.

And consumers are subscribing to more services than ever, especially during the COVID-19 pandemic, with newer players like Paramount+, Discovery+ and Peacock competing for attention with Disney+, Netflix and HBO Max.

A Parks Associates survey found that 31% of households had four or more streaming subscriptions in the third quarter of last year, up from 14% a year earlier. The number of streaming platforms has passed 300 in the U.S., more than double the number in 2014, the consultancy said.

Companies are trying several different ways to streamline the market.

London-based ScreenHits TV recently launched an app to help viewers see what's on all the different streaming channels through one TV Guide-like system. Unlike Struum, ScreenHits allows users to see content on the streaming services they already subscribe to, including Netflix, Hulu and Amazon. ScreenHits' desktop version is free, while its iOS app charges 99 cents a month and includes additional features.

Users "can see very clearly what they're getting from cutting the cord and having access to these streamers," said ScreenHits CEO Rose Adkins Hulse. "We really believe the streamers are the new TV channels for the future."

Companies such as Roku and Amazon try to aggregate streaming apps by offering viewers different services through a single interface. Search engine apps including JustWatch and Reelgood help viewers find what shows and movies they're looking for, and show users what series are available through the different providers.

"They're all trying to solve this issue, because consumers are just overwhelmed," said Parks Associates research director Steve Nason. "They love that they have all this choice but that choice is killing them."

Subscribers will pay $4.99 a month to receive 100 credits. Those credits can then be used to pay for a TV episode or movie (say, "Planet of the Apes," for four credits), giving the viewer access to that title for 30 days. Users can buy additional credits through the app, similar to Audible. A TV show episode will cost three to four credits, while a feature film will cost five to six.

The idea was inspired by ClassPass, an app that lets subscribers use credits to try workout classes at different gyms and fitness studios.

"It's another front door for the user," DeVillier said. "We're letting you dip in and dip out of these services."

The catch is that Struum won't have the big streamers, such as Netflix, Amazon Prime Video, Hulu, HBO Max, Disney+ and Discovery+. Instead, the company has deals with more niche services that are looking for ways to increase their reach. Cinedigm, for example, had about 640,000 subscribers as of April.

The biggest streaming companies are doing everything they can to increase "scale" — size and reach — on their own. Disney+ and Netflix are spending billions of dollars on original content and don't need to share revenue with an app like Struum to help with their marketing. AT&T on Monday announced a deal to spin off WarnerMedia, the parent of HBO Max, in a $43-billion merger with Discovery Communications.

But Eisner predicts that some bigger players will eventually get on board with Struum if it is successful.

"If you get big enough, a company like ViacomCBS would find a way to introduce consumers to their really good product through Struum," he said. "I think they will find over time that it's just another avenue to bring people to their portal."

For now, Struum thinks there's a lucrative big business in aggregating the content from the 250 or so services that represent the more obscure end of the streaming industry.

For the smaller streamers, being on Struum is a chance to get their names out there and get more subscribers. If a user watches a lot of Magnolia content, for the example, Struum will suggest they should consider subscribing to Magnolia's stand-alone service. Struum will split revenue with providers based on what movies and shows users watch by spending their credits.

With the combined cost of the major streaming services already rivaling the cable bundle, it's unclear whether viewers will want to pay for yet another service to package a lot of content from the more minor players in the streaming wars. Parks Associates' Nason said consumers may be happy with finding content on the various apps without help from a third party.

"Do most consumers want to sign up for this other thing, or am I just fine taking 10 minutes to find something to watch on Netflix?" he said.

But the timing is opportune for Struum to test its business model, said Jeff Cuban, who overseas his brother Mark Cuban's entertainment properties, including Magnolia Pictures.

The pandemic increased consumers' interest in streaming indie films rather than going to the movies. At the same time, the big players are funneling their movies to their own streaming services rather than licensing them to potential rivals, creating an opportunity for aggregators.

"Everyone is completely siloed," Cuban said. "Struum is really hitting the market at almost the perfect time relative to consumer behaviors changing."