'Hacks' began as a battle of generations. Becoming a love story made it great Images 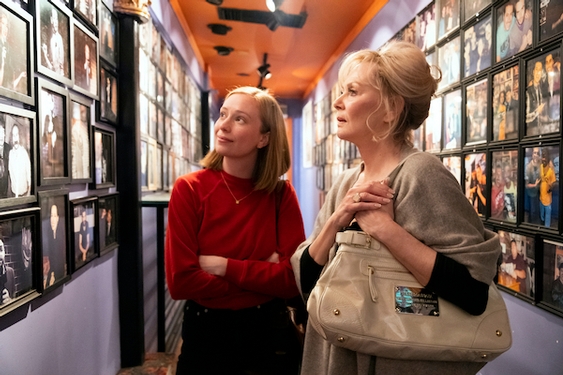 And so we come to the end of season one of "Hacks" on HBO Max. (I made a rhyme.) It is the end, and not the end, because the show, in which Jean Smart plays Deborah, a Las Vegas-based comedy legend of mature years, and Hannah Einbinder plays Ava, the 25-year-old comedy writer who falls into her employ, has been renewed for a second season. Still, certain arcs have been momentarily concluded, even as the seeds of future trouble, to be concluded by subsequent arcs, have been sowed.

Among its other good qualities, "Hacks" represents the latest port in the ongoing cultural cruise that is Recognizing Jean Smart as a Great American Actor, "Designing Women" (which was good!) having been previously muscled from the first line of her obituary by "Legion," "Watchmen," "Fargo" and "Mare of Easttown." In some way, Deborah may be seen to echo Smart on the eve of this recognition: someone who had done fine work but had also become part of the cultural wallpaper, on a career plateau or gentle descent rather than an artist on the way up. For both, the opportunities and choices have grown more daring, and the future feels unwritten and exciting and ripe with promise.

At first, it was hard to take "Hacks'" measure — it seemed to promise some inside look at comedy, but it isn't really a show business story, only a story set in that world, against that backdrop. To the extent that it examines the clash of art and commerce, of old and new ideas of what's funny, and notwithstanding Deborah's episode eight humiliation of a comedy club host — an actual hack, with a pocketful of bad sexist jokes — it's only to define character, not to analyze comedy styles or to argue that onstage, Telling Jokes is better or worse than Telling the Truth. (Offstage, the series definitely argues for truth.)

Deborah and Ava test one another until the moment they begin to value each other for who they are — during a trip to a cosmetic surgery spa, about halfway through the season — which is itself followed by further ruptures and reconciliations and a climactic break on the eve of premiering the radically rewritten act they have been working on together, an act that Ava is sure is brilliant and which Deborah hopes will at least not destroy her career.

But we aren't really worried about Deborah's career, because she's rich and famous enough. With a 2,500-show residency behind her, a street named after her and her own line of QVC products, she will find something to do, as much as the series paints her as someone the world is ready to throw away. Ava's career doesn't matter to us because the whole point of her storyline is that she grows from a person who cares about getting ahead to a person who cares about people, who abandons her arch and cynical attitude to the world — or reduces it, anyway — for something more open and positive. On her swing back through Los Angeles, she runs into her old girlfriend Ruby (Lorenza Izzo), who observes, "There's something different about you. You're not spiraling or making me spirally."

When Deborah decides to get honest with a reporter about things she has kept under wraps — there is a lot of wrapping in her life — and talks about how the husband with whom she shared a sitcom abandoned her, because "ambition got in the way," it quietly echoes that she may be abandoned again. This time by Ava, who — she has become aware — may be about to leave her for greener, groovier pastures. Ava, meanwhile, discovers that the hot British showrunners who want to work with her are most interested in having her tell tales about Deborah for a series about a bad boss. (They are horrible, and like the sexist comedy club host, a little too easy for the viewer to write off.) Ava realizes she needs to pick a side, and for the first time in her life, it's on the side of someone else. "I don't need your job," she tells them. "I'd rather have my dignity." And, leaving the table, takes a pratfall.

What "Hacks" reveals itself to be, finally, is a love story, a sort of romantic comedy, of two people coming to see one another, to cut one another slack where necessary and to hold one another accountable when necessary. One brings the wisdom and arrogance of youth and the other the wisdom and arrogance of age — each can see what the other can't — and in the language of the rom-com, they complete each other. It is not a master-student or a mother-daughter thing. Deborah has a daughter, a hapless problem child played with affection by Kaitlin Olson, and Ava a mother, a hysteric played by the great Jane Adams, whose frightened vision of Ava moving back home requires her to euthanize the cat occupying her old room. (Deborah's jealous right-hand, Marcus, played by Carl Clemons-Hopkins, is the third party in the Deborah-Ava triangle.)

When Deborah materializes almost magically at Ava's father's funeral, just before the season's close, it is not exactly John Cusack playing Peter Gabriel for Ione Skye on a boom box hoisted over his head, or Julia Roberts (just a girl) asking Hugh Grant (a boy) to love her. But it kind of is — a moment that doesn't wipe away all that's gone wrong between them over the course of 10 episodes but that reclaims what's right. It's the moment where we might believe they'll live happily ever after. Though, because there is a season two coming, we know they won't, or won't yet. ("Buckle up. Here we go," Deborah says to Ava as they hit the road by private jet at the end of the season finale. I can't say whether it's an intentional nod to Bette Davis' oft-quoted "Fasten your seat belts, it's going to be a bumpy night" from "All About Eve," another work about young and old artists at the early and late stages of a career, but that there are bumps ahead has just been established.)

They are not going to fall in bed with one another — though Ava has a dream that they do — but the series is thoroughly invested in the tropes and beats of situation and romantic comedy. The lie that comes back biting, the unopened gift that, finally open, decides a course of action, the unexpected appearance of one party, one partner, in a next-to-last scene — this is textbook stuff. Indeed, one of the strengths of "Hacks" is that it puts the story of clashing cultures in an old-fashioned frame. It feels fresh and familiar. Like most other arts, comedy moves forward by denying the older generation it also reveres. The show's creators, Lucia Aniello, Paul W. Downs and Jen Statsky, who have "Broad City" in common, are in their mid-to-late 30s, old enough to look back at being Ava's age with amused pity and to understand that history does not end with one's generation and that there is no substitute for experience.