Out of the Shadows: Illegal Immigrant Students 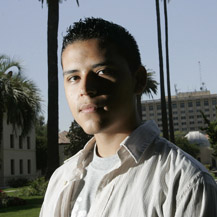 Hector Vega is co-valedictorian of James Lick High School in East San Jose, winner of a $20,000 National Merit Scholarship and an entering freshman on a full scholarship at Santa Clara University.

He didn't speak a word of English five years ago when he arrived from Mexico, but he mastered the language in a year, advanced to honors classes and graduated from high school with a 4.0 grade-point average.

Vega is also an illegal immigrant.

Tall, soft-spoken and confident, Hector Vega, 19, is making a risky choice in sharing his story and declaring publicly, “Soy ilegal.”

In the divisive national debate about immigration reform, the young man offers a rarely heard personal and public voice, representative of the predicament of thousands of children who were brought here by undocumented parents. Among the 12 million illegal immigrants living in the United States, each year about 65,000 undocumented children graduate from U.S. schools, unable to work legally, or qualify for federal school loans and grants.

“I speak on behalf of many that come here in the quest for a better life,” he said in a valedictory that moved students, parents and teachers to tears. “I am, like many others out there who never give up their hopes, an immigrant.”

The controversial DREAM Act, a provision in the U.S. Senate-approved immigration reform bill, would give legal status to students like Vega.

The Washington-based Center for Immigration Studies opposes it.

“It undermines the enforcement of immigration laws,” says John Keeley, spokesman for CIS. “The laws are explicit on what's to be done with illegal immigrants, irrespective of their GPAs or age.”

For Vega, the prospect of not being able to attend college here was more frightening than the risk of deportation.

Everyone around Vega – his mother, friends, teachers, mentors and new college advisers – is worried for him.

“Anybody who speaks for justice puts themselves at risk,” says the Rev. Sonny Manuel, rector of the Jesuit community at SCU. “If this were safe, if everyone agreed, you wouldn't have to say anything.”

Virginia Kice, spokeswoman for Immigration and Customs Enforcement, said, “Anyone who's in this country illegally is in violation of our immigration laws and is subject to arrest,” but in an individual case such as Vega's, she added, “We don't speculate on what action we might or might not take.”

Vega was 14 when he arrived in San Jose with his sister. They came on six-month visas, like their mother, who had immigrated two years earlier to join two aunts, both U.S. citizens.

He washed big rigs and later sold cell phones, primarily to Spanish speakers at a mall. His mother worked at a nursing home.

He organized a bilingual certification campaign for Californians for Justice, a non-profit organization. East Side district schools began issuing certificates of bilingual ability to students.

Out of six universities that accepted Vega, he chose Santa Clara University. It offered a full scholarship.

“Hector Vega is an example of how well these students have done,” Manuel says. “They're high achievers.”

Vega does not know yet what he'll major in at college. Politics interests him. So do journalism and writing. He hopes a member of Congress hears his story and becomes inspired to introduce legislation to help illegal immigrants.

Undocumented individuals already living and working in the United States should be granted a path to citizenship, he says, because mass deportation “would be chaos and cause a crisis.”

He would also like to see more skilled and educated immigrants from Mexico.

For now, Vega weighs in on an important national debate, knowing its risks.

“I think it's normal to feel scared,” he says. “But there's bigger things. The dream, the hope, the idea that you can better yourself.”