The Jolenes: Get it to Go 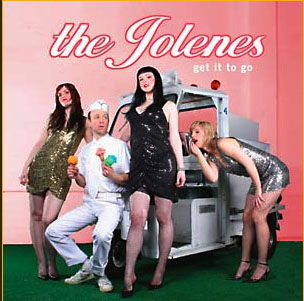 There are no songs about the Iraq War, global warming or corporate malfeasance. Rather, the Jolenes obsess over everyday topics such as summer treats (bubble-punk opener “Ice Cream”), sucrose (the Archies-meets-Elastica “Sugar”) and makeup mavens (Liz Phair-ish “Make Me,” with the telling lyric, “Pretty is as pretty does”).

But hurt girls thirst for revenge, which explains “Curses,” caustic “Frenchie” and jangle-rocker “Poison.” However, the foursome could have added more ampage to a lackluster cover of Stevie Nick's “Leather and Lace.” The Jolenes aren't the Go-Go's or the Bangles, but Get It to Go nevertheless is a candied rush of syrupy harmonies, confident arrangements and punk-pop ear-candy.