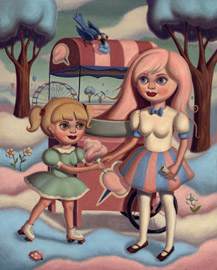 If you must have a nightmare, choose Ana Bagayan to be its illustrator. Then when you dream of tadpoles devouring their mother, robins swallowing their nurse, or every rabbi's worst nightmare – piglets eating a swine – at least, with Bagayan behind the brush, your stygian dreams will be rendered in glorious oils.

Of course, as with any La Luz De Jesus show, there's also the obligatory bunnies acting anything but cute and cuddly. Perhaps saturated by evil bunnies during the 2001-2002 movie season where Sexy Beast , Donnie Darko and Cabin Fever all featured malevolent rabbits, I'm predisposed to dismiss any current works, in any medium, that subvert the little furry mammals to limn disquiet.

Not that Bagayan can be held solely responsible. La Luz must have a rider that at least one painting from any artist that has a show – whether Mark Ryden, Gary Taxali or Daniel Peacock – include a perverted hare.   Perhaps it's the rise of dunnys, collectible small plastic bunny toys customized by some of the finest fine-artists working today, including Gary Baseman, Tim Biskup and Craola. But not, as yet, Ana Bagayan.

Bagayan is a wunderkind; born in 1983 in Armenia, the young artist's oils have already been featured in GQ , Rolling Stone and Spin , a dozen other publications and a previous solo show at La Luz in 2005. Plus she just graduated from Art Center in 2004. Yeah, there are some jealous classmates out there. (No, I'm not one of them, I'm just sick of rabbits.)

Bagayan's strength lies in her imagination. In the perfectly pink Cotton Candy Land , a salmon-haired lass spins her tresses into the sugary treat, and the entire painting looks sweet enough to eat. When her paintings aren't acting as an emetic, they tempt you like rainbow gumballs.