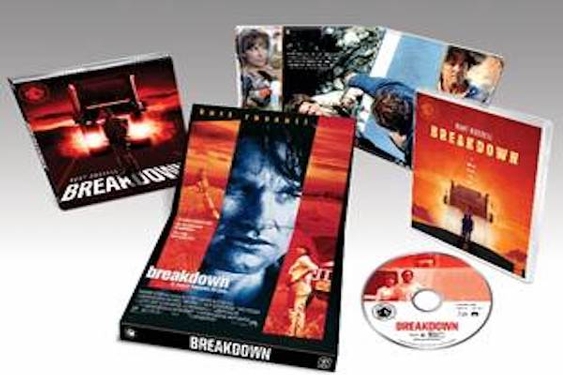 Filled with tension and suspense, the fan-favorite thriller BREAKDOWN arrives on Blu-ray as part of the Paramount Presents line on September 21 from Paramount Home Entertainment.

Featuring a director-approved remaster from a new 4K film scan, BREAKDOWN is presented in a limited-edition Blu-ray Disc™ with collectible packaging featuring a foldout image of the film’s theatrical poster and an interior spread with key movie moments.  The Blu-ray boasts a wealth of new bonus content, including a look at the never-before-seen alternate opening, a new Filmmaker Focus with director Jonathan Mostow, commentary by Mostow and star Kurt Russell, a featurette with actress Kathleen Quinlan, an isolated track of Basil Poledouris’s score, access to a Digital copy of the film, and more.  A detailed list of special features follows:

Synopsis Kurt Russell is Jeff Taylor, headed toward a new life in California with his wife Amy (Kathleen Quinlan). When their car dies on a remote highway, a seemingly helpful trucker (J.T. Walsh) offers Amy a ride to the local diner while Jeff waits with the car. Then Jeff discovers his vehicle was deliberately tampered with, and by the time he gets to the next town, his worst fears are about to come true.

Director Brian Robbins scores an emotional home run with the inspirational sports drama HARDBALL. Originally released on September 14, 2001, the film celebrates its 20th anniversary this year and will arrive on Blu-ray for the first time ever September 21 from Paramount Home Entertainment.

Featuring a sensational cast including Keanu Reeves, Diana Lane, John Hawkes, D.B. Sweeney, and Michael B. Jordan in one of his first film roles, HARDBALL follows Conor O’Neill (Reeves), a down-on-his-luck gambler in debt to dangerous loan sharks.  Desperate for cash, Conor reluctantly takes a job coaching a youth baseball team.  The “team” turns out to be a ragtag group of tough-talking kids from Chicago’s inner city.  Secretly, Conor plans to desert the team after he wins a big bet.  But the stakes are higher than Conor imagined: the kids need someone to believe in.  As Conor wrestles with his past, the kids start to teach him some lessons that will forever change his future – that responsibility and trust must be earned and hope can appear in the most unlikely places.