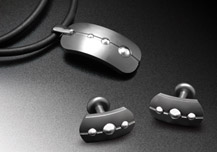 No wonder they call it ice. Jewelry trends move at a glacial pace.

But a bauble bend toward the boys is starting to heat things up.

Silver-screen studs Brad Pitt, Johnny Depp, Samuel L. Jackson and Orlando Bloom are jewelry aficionados. Also helpful is the butch factor rising every time an athlete shows off his Fort Knoxies. And who hasn't looked slack-jawed at the diamond droolery worn by rappers and rockers? There's certainly no shock left in a world where Diamond Diddy brings the bling to the red carpet.

Fine jewelry for men is considered the fastest-growing sector in the industry according to the Jewelry Information Center, an industry trade group. Here's their evidence:

–Kay Jewelers has expanded their men's section from studs and hoops to sporty bracelets and three-stone diamond rings.

–Tiffany is expanding their cufflink/watch section to now include sporty men's jewelry.

–Tahitian pearls are growing in popularity. Retailers are marketing one simple Tahitian pearl strung on a simple leather cord for men.

–Tanzanite is now being marketed to men as an investment.

Last year, men's jewelry represented about 10 percent of the $48.3 billion in fine jewelry sales in the United States, according to a study by National Jeweler magazine. This excludes watch sales. Figures from previous years were never gathered because the category barely existed.

Distributed by McClatchy-Tribune Information Services
Article posted on 9/5/2006
This article has been viewed 1479 times.