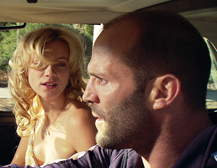 “In some ways I think there is a draw to tough guys; guys that live on the edge and take risks,” says Amy Smart while explaining her character's motivation in the new action-packed feature, Crank.

The film begins in the bedroom of Chev Chelios (Jason Statham), a hit man who's just had a crisis of conscience and has decided to quit his life as a gangland assassin. Things don't go so easily, though, as the very next day Chev finds out that he was poisoned in his sleep the night before with a lethal cocktail of Chinese drugs that will stop his heart in less than a day's time. This means he has 24 hours to sew up all of his loose ends: maybe obtaining an antidote for what's ailing him, settling the score with some heavily armed thugs and keeping his girlfriend, Eve (Smart), out of harm's way.

Known for roles in films like Snatch and The Transporter , Statham's managed to carve out a cottage industry with his squinty-eyed, sarcastic delivery-but Smart says his screen persona belies the real guy.

“I loved him! He's got a lot of street smarts and life experiences and he brings that to his work. He's raw, he's direct and he's so funny – he's got that great British sensibility,” the actress says. “As a British actor, he hasn't done what most British actors have done – gone to ‘this training school' and ‘this theater' [for classical lessons]. He's really working with his instincts. As an actor that's really important to keep in mind because, I think, a lot of theater schools can train that out of you.”

As the storyline maintains, Chev's only means of staving off the debilitating effects of the drug he's been injected with is to keep a steady stream of adrenaline coursing through his veins while he goes about his agenda. This ultimately leads to a lot of running through the streets of L.A, leaving cars totaled, shopping malls demolished and pedestrians stricken with panic.

“This film will definitely surprise people,” Smart declares. “It will completely rock their world. I think the fun part is that you do really see that life is meant to be lived to it's fullest – it's like a rollercoaster ride.”

Smart is no stranger to hard work, evidenced by the fruits of her labor when she left the Crank set. This fall, the actress is set to star in the TV crime series “Smith” alongside Ray Liotta, in a role she clearly looks forward to exploring on the small screen. “I'm one of the criminals in the crew that he works with; I'm the only female, Annie. And my character's very smart, very strong and very dangerous – she'll do anything to get what she wants and she will use her sexuality to get it. She's multi-talented and I love playing her.”

Shot primarily with specially designed High Definition hand-held cameras in popular locales all over town, Crank offers audiences who live beyond the 213 and 310 area codes a closer view of what Los Angeles is like up close. “It was nice to go to work and come home at the end of the day,” Smart recalls of filming in the streets of her hometown. “It's fun shooting around L.A. It was exciting to get out and see more of the aspects of the city and to feel the pulse of different neighborhoods.”

While Smart's Crank co-star does a majority of the film's drop-kicking and car chasing, the actress still managed to quench her need for speed and get her karate chops on. “I got my fix from doing ‘Smith,'” she says with a grin. “I was happy to be a part of the stunts and climbing fire escapes and dodging bullets. I don't, necessarily, feel like I've got to do a lot of action films but I had a great time working on Crank .”

Crank is currently in theaters.