Rater Haters: Kirby Dick and Eddie Schmidt Waves in Hollywood With This Film is Not Yet Rated 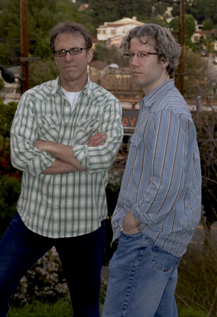 Since making his directorial debut with the internationally acclaimed Sick: The Life & Death of Bob Flanagan, Supermasochist , independent film maker Kirby Dick has been making ripples in the industry with the subject matter he's chosen to take on with his cameras.

Dick's already making waves with This Film is Not Yet Rated , a documentary-styled outing that explores one of the biggest mysteries in Hollywood: how the Motion Picture Association of America (MPAA) assigns ratings.

Teaming up with producer Eddie Schmidt, This Film shines a light on one of Tinsel Town's topical taboos, a subject that insiders rarely talk about at parties[PERIOD] but according to the film's director and protagonist, not everyone in Los Angeles prefers to toe the party line. “For many years, I, like many film makers, have been pretty upset with the way that the ratings have been administered,” Dick says. “In particular, the art films get such stringent ratings. I've wanted to make something on the MPAA and it's rating system for many years but because they are so secretive, all I could [conceive] of making was a clip film of interviewing film makers and hearing their experiences.”

The current rating system has been utilized by the MPAA since 1968, when Jack Valenti left his job as a lobbyist in Washington, D.C. and took over as the organization's president and, as Dick and Schmidt maintain, the MPAA methods have been veiled in secrecy ever since.

“At first we wanted to research the film in the traditional way but the MPAA doesn't release information on how films are rated,” Schmidt says. “You can't get a file and see how they voted on, like, Mission: Impossible ; you can't do that, it doesn't exist.”

Once they came to grips with the fact that they wouldn't get any interviews with actual movie raters, the two decided on another approach. “We wanted to talk to people within the studios who were able to work the system, [but] they didn't want to talk because they didn't want to lose their jobs.”

In spite of the latter, the director forged ahead with his production. Here, he explains the double-edged sword he and other directors have to work with on a regular basis. “The studios claim that the raters' names are kept secret to protect them from [any outside] influence but the studios are the only people who have access to [the raters],” Dick reveals. “Heads of production, post-production supervisors have an ongoing relationship with these people – it's like what [“Southpark” co-creator] Matt Stone said: ‘If it's a studio film, you're given advice even before you submit your film' – there's a dialogue that goes back and forth through the entire process. With the independent film makers, you have no clue.”

So how do the filmmakers propose to change the current system?

“I think to develop a professional set of standards takes time,” Kirby states, alluding to the fact that there are no written standards for how movies are rated. “Obviously, there are constituencies that would have to weigh in ... I agree that there are parents that don't want their children to see certain films, there are adults who don't want to see certain films. They should know what is in those films so that they can make that choice. I think it should be the entire range of the industry, outside the industry as well. I completely agree with that.”

He continues, “Keep in mind, kids do [eventually] see the films on DVD. The MPAA has set up a system here where they get to see the same film twice – the R-rated version or the NC-17 version, then the unrated version that comes out on DVD – and this is another way that they're very cleverly using the ratings system to maximize profits.”

Dick is well aware that an industry backlash from the powers that be lies in the balance. “On the blacklist we've risen to the top,” says Dick with a dry laugh. “I think what it all comes down to is, if the film makes money, I'll be good.”

This Film is Not Yet Rated is currently in select theaters.

Interviews
'Crazy Rich Asians' made Henry Golding a star. Now he's showing Hollywood everything he can do
616 views

Interviews
Mary McNamara: After losing a child, 'Pieces of a Woman' filmmakers channeled their grief into art
649 views
bid=||