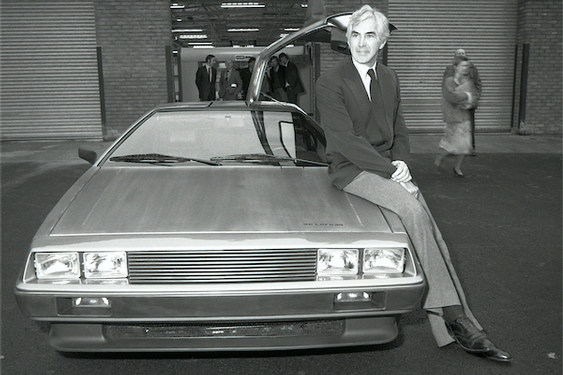 A sympathetic devil posing next a DeLorean? Even the man whose name is on the vehicle might have appreciated the metaphor of an Instagram photo shared last week by actor Tom Ellis, who plays the suave title character in "Lucifer."

In a sneak peek of the sixth and final season of the Fox-turned-Netflix TV series, a dapper Ellis is shown leaning suavely against the iconic gull-winged car. "Good things are coming," posted Ellis.

If only that had been true for the 1981 DeLorean DMC-12, which was hyped as an automotive game changer, but resulted in one huge scandal that left a wake of destruction in its path.

Forty years after the first one rolled off the assembly line, the automobile that bears John DeLorean's name is best known as the time-traveling vehicle of the "Back to the Future" movies.

DeLorean himself, who died in 2005, is still a complex riddle who continues to fascinate filmmakers. The latest effort to explore the psychological demons of the disgraced automaker is a three-part documentary series titled "Myth & Mogul: John DeLorean," which arrives Friday on Netflix.

The bare bones of the story are familiar to those who were alive during the 1970s, the heyday of DeLorean's visions of grandeur, and the 1980s, when he was at the epicenter of what was dubbed the trial of the century.

After a meteoric career as a muscle car pioneer at General Motors in the 1960s, DeLorean launched a company to make one vehicle, the DeLorean DMC-12, billed at the time as a fuel-efficient, environmentally friendly, durable and impossibly hip ride.

It seemed too good to be true, and it was. Desperate for money to keep his dream afloat, DeLorean was arrested in 1982 after a government sting operation and charged with trafficking cocaine.

He was acquitted in that trial and a subsequent one on charges of skimming $9 million from investors. Still, his reputation was shattered, and for DeLorean, his chroniclers agree, image was everything.

In 2019, two movies attempted to tell DeLorean's story in artistically creative ways. "Framing John DeLorean" was an intriguing hybrid that combined a traditional documentary with dramatizations of real-life events involving DeLorean, who was played by Alec Baldwin.

That same year, "Driven" offered a fictionalized version of DeLorean's rise and fall, with Jason Sudeikis starring as the FBI informant who helped arrange the sting and Lee Pace as a sad, tormented DeLorean scrambling to keep his dream alive.

"Myth & Mogul" is perhaps the most clear-eyed depiction yet of a man whom his ex-wife, Cristina Ferrare, describes in the docuseries as a "malignant narcissist."

Using extensive interviews with those close to DeLorean and journalists who covered him, it boasts rare, unseen footage shot long ago by filmmaker D.A. Pennebaker, whose 1967 film about Bob Dylan, "Don't Look Back," essentially created the rock documentary.

In the first episode, Chris Hedegus, Pennebaker's wife and filmmaking partner, explains how, at first, Pennebaker saw DeLorean as "this Kennedyesque figure who was going to make this dream car." But by episode two, Hedegus is revealing that she always felt DeLorean was hiding something and seemed "uncomfortable in his own skin."

The series offers a compelling portrait of DeLorean's transformation from a working-class Detroit kid who grew up with an alcoholic father and "some physical abuse going on in the household" (according to DeLorean's son Zach) into a Hollywood-glamorous household name — complete with plastic surgery to give him a strong, leading-man chin — who hung out with stars like Johnny Carson and spent money extravagantly.

As "Passages" author Gail Sheehy puts it in the first episode, DeLorean "had a massive midlife crisis" and discarded the former version of himself, much like a consumer trades an old car in for a new, improved model. In a sense, he was a flesh-and-blood Great Gatsby who embodied the American quest for personal reinvention.

But as Irish director Mike Connolly unsparingly shows here, DeLorean was too busy trampling on those who got in his way to become a doomed romantic figure. In his attempt to realize his ambitions, he hurt many people, including the workers at his DeLorean Motor Company plant in war-torn Belfast, who drew hope from what they thought was a long-term opportunity.

Empty promises and personal betrayals are depicted here as a feature, not a bug, of DeLorean's style. The second episode chronicles a deceptive ad-selling scheme that dates back to his Detroit college days at Lawrence Technological University. By episode three, the daughter of an inventor who trusted DeLorean to handle his patents is calling him a monster.

Even Zach DeLorean opens up about the the pain he feels about his father's namesake car. Saying that it "represents a whole lot of turmoil in my life," he admits that he wishes he had "a (bleeping) grenade, just toss it in the thing."

Having left behind a fleet of only 9,000 cars that had some well-chronicled issues, why does DeLorean still have such a grip on the public imagination? Chalk much of it up to his genius for self-promotion.

One of the reporters interviewed for the docuseries, former Automotive News editor Ed Lapham, says DeLorean had a gift for making himself the center of the story.

In an era when corporate executives didn't court celebrity coverage, DeLorean helped forge the public — and highly publicized — role that is now embraced by magnates like Elon Musk, Richard Branson and Jeff Bezos.

"He was a character, and reporters, editors, TV reporters, TV editors and film producers like that sort of story," says Lapham of the constant attention DeLorean received.

Nowhere is that more evident than in the third episode, when Ferrare remembers a turning point in their marriage. When DeLorean made the cover of Time magazine, she brought him a copy while visiting him in jail "He looked at it and he smiled. ... He said, 'I have made millions and lost millions in my life, and half the fun is getting it all back.'"

Another writer interviewed for "Myth & Mogul" is Hillel Levin, the author of “Grand Delusions: The Cosmic Career of John DeLorean" (and co-author of "In with the Devil," an unrelated book that's being developed for an Apple limited series starring Taron Egerton).

According to Levin, DeLorean was "like someone we're all too familiar with today, someone who realized he could say things that weren't true and continue to magnify them, and it was very unlikely that that reporter he was talking to was going to go back and check to see, you know, what he had said in the past. .... It's why he's such a cautionary tale for the press, not just for business people."

At the time of his death, DeLorean was living in a modest condominium in Morristown, New Jersey, selling a line of watches and still talking about his plans for a new car company.

By then, he had lost the trappings of his celebrity, including the Bedminster, New Jersey, mansion that he bought in 1981. It served as a luxurious backdrop for photo spreads of DeLorean and his family.

The Trump National Golf Club in Bedminster opened in 2004, a year before DeLorean's death. It is built on the site of the auto mogul's former estate.