From an image computer generated in-game, Joshua Rogers of Australia and VRS Coanda Simport passes Alejandro Sanchez of Spain and MSI eSports for second position during a feature race.

On the first day of these Games, on the eve of his sport’s Olympic debut, Tony Hawk hopped on his board and tested out the new bowl on Tokyo’s waterfront. He called the experience, shredding Ariake Urban Sports Park, surreal. Skateboarding had already broken into mainstream, but reaching this stage was another level.

“As a kid that was mostly lambasted for my interest in skateboarding, I never imagined it would be part of the Olympic Games,” Hawk wrote on Instagram.

Hawk’s competitive skateboarding career began when he was 10 years old, two years after the 1976 Montreal Summer Olympics, back when skateboarding’s stigma seemed insurmountable.

By the turn of the century, he was widely regarded as the greatest skateboarder ever. He was in commercials, movies and television shows. He had his own video game. He was the sport’s most famous ambassador, a household name alongside Michael Jordan and Wayne Gretzky. But he never was given the opportunity to compete in the Olympics.

“I’m surprised it took this long for them to figure it out,” Hawk said. “I believe they needed a youthful energy to the Summer Games and it’s overdue.”

The International Olympic Committee certainly understands its predicament. The Olympics’ audience is aging and the battle for younger eyeballs is fierce with more entertainment options than ever. The event’s grip is slipping.

The reality prompted the IOC to have skateboarding, surfing and sport climbing debut at the Tokyo Games. All three will remain on the program for Paris 2024, which will also include breakdancing for the first time.

The benefits flow both ways. The sports give the Olympics a different energy and a gateway to a different audience. The Olympic Games provide the sports unmatched exposure.

“I think it’s important for our sport to grow even more,” Slovenian women’s sport climber Janja Garnbret said. “More people will get involved in climbing, so I think it’s good in every aspect.”

Garnbret won gold Friday in a final that felt different from most others at the Olympics. Music blasted for the entire six-hour event. Commentators talked over the speakers during the eight competitors’ climbs, encouraging the climbers when they weren’t narrating the action. Enough event workers, team members and Olympic officials congregated to briefly make the absence of fans an afterthought.

It was a successful step into unchartered territories, perhaps giving the IOC confidence to further pursue other less traditional sports in the future. But the next frontier remains unsettling.

Esports fit the criteria to sustain the Olympics’ demand. Competitive video game tournaments draw thousands of fans in person and millions more viewers on broadcasts around the world. Global revenue is projected to surpass $1 billion in 2021, according to a report by games and esports data company Newzoo. It’s growing without an end in sight.

The IOC has not ignored the surge. The inaugural Olympic Virtual Series was launched ahead of this year’s Games with players competing in five sport simulation competitions — auto racing, baseball, cycling, rowing and sailing.

The IOC also recognized the Intel World Open, an international virtual event that had players competing in “Street Fighter V” and “Rocket League,” last month. While it wasn’t an officially IOC-sanctioned event, it was featured on the IOC’s website.

“I do think that esports will be part of the Olympics at some point. Absolutely,” said Steve Arhancet, co-CEO and owner of Team Liquid, a North American professional esports organization. “Absolutely. There are just way too many gamers. There’s too many people watching other people play video games. Gaming is now more ubiquitous with growing up. And it’s all up and to the right. That’s a fact.

“So in order for the Olympics to stay contemporary with the times, they’ll need to take a serious look at this and figure out how to have esports participate in Olympics.”

Esports’ potential inclusion, however, presents unparalleled complications. Entities don’t own traditional sports, but companies own esports titles. Having developers release their IP would require negotiation. Choosing the games would require a quadrennial discussion since popularity is often cyclical.

Then there’s the matter of violence. The IOC has refused to consider games it deems violent, which could prevent the majority of esports’ most popular titles from consideration.

But esports’ candidacy starts with one fundamental question: Is gaming even a sport?

“All of our players are athletes,” Tricia Sugita said. “I don’t think you can argue the skill or the time put in. I think the last part that may be questionable for some is just the physicality and that’s just the last criteria.”

Sugita is the CEO of FlyQuest Sports, another prominent North American esports organization. It was founded in 2017 by Milwaukee Bucks co-owner Wesley Edens, a member of a growing group of traditional sports executives who have invested heavily in the esports industry.

Edens saw two of his Bucks players — Jrue Holiday and Khris Middleton — win gold with the U.S. men’s basketball team in these Olympics. One day, if the Olympics’ hunt for younger viewers veers into the next frontier, he may see one of the FlyQuest players take gold in esports. It might just be a matter of time. 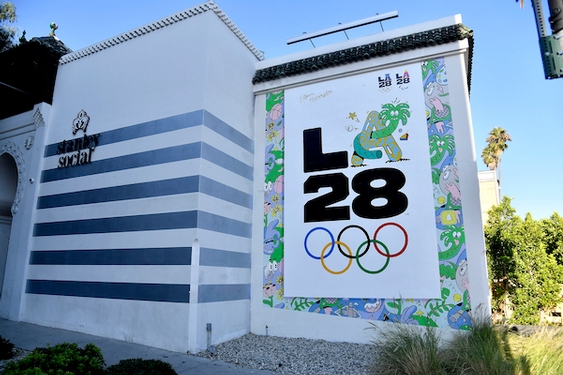 Summer Olympics
These Olympics’ legacy will be one of an overdue conversation on athletes’ mental health.
1,112 views

Summer Olympics
As Shae Anderson chases her Olympic dream, she stays strong for her father
716 views