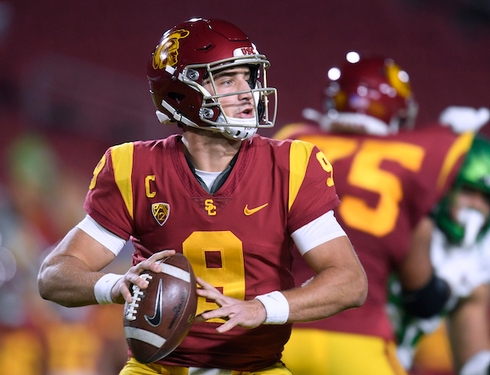 In this photo from December 18, 2020, Kedon Slovis (9) of the USC Trojans passes against the Oregon Ducks during the first quarter in the PAC 12 2020 Football Championship at United Airlines Field.

After a sophomore season spent in the throes of pandemic protocols, slogging his way day after day through Zoom calls and COVID tests and unwavering uncertainty, Kedon Slovis was — to put it lightly — emotionally spent.

It'd been a frustrating season for USC's quarterback for many reasons, even before it all unraveled during a Pac-12 title loss to Oregon. While USC won its first five games — and the Pac-12 South division — every step felt like a struggle. Slovis had hoped to step up as a sophomore, to prove himself as a leader in the locker room, but with the pandemic, the opportunity never really presented itself. The team, forced to comply with stringent restrictions, didn't feel much like a team at all, and Slovis, fresh off a dynamic debut season, didn't feel much like himself.

"I think I speak for a lot of dudes on the team — it wasn't easy," Slovis said. "It wasn't the most fun time."

Most frustrating of all, his mechanics were failing him, and there was no time to fix them. Keen observers could intuit something was off. Months later, Slovis learned it was largely a matter of timing. His weight was shifting forward too quickly, leaving his arm to catch up. He was finishing throws using solely the strength in that right arm, leading some to wobble out of his hand.

But for most of the season, Slovis couldn't pinpoint the problem. As a result, the confidence behind his passes suffered.

A season's worth of frustration culminated in the title loss to Oregon. After, he says, the entire team was worn out.

"You can't expect to play like that the whole year and win consistently," Slovis said. He described the defeat as "the epitome of our frustrations."

Slovis is still hard on himself for how it all unfolded, even while, on paper, everything seemed fine. He led the Pac-12 in passing yards (1,921) and touchdowns (17) and was named to the All-Pac-12 first team. He led winning drives against Arizona, Arizona State and UCLA. To Slovis, though, his season felt like a step in the wrong direction.

But these days, on the doorstep of a critical campaign for USC, the junior quarterback is feeling much more like himself. His mechanics have been fine-tuned by the quarterback gurus at 3DQB in Hermosa Beach. His arm, he says, feels better than ever. All around him are signs that the frustrations of last season are in the rear-view mirror. USC's campus is buzzing with students. There's energy at practice again.

Sure, there are still questions. Chief among them — whether Slovis can recapture the magic he first found as a freshman. For USC, the answer could drastically affect the future of the program. For Slovis, with NFL staff watching closely, the implications are equally significant.

With a season opener against San Jose State looming Saturday, that pressure is as present as ever. But as the start of his third season approaches, those expectations don't seem to be weighing much on USC's starting quarterback.

"It's just [about] getting back to having fun playing football," Slovis said, "and just being myself."

Max Slovis has noticed that shift in his son since the end of last season. He watched Kedon toil last year through his shortened sophomore campaign, unable to unlock his full potential. He saw how it wore him down emotionally.

The first step in putting last season behind him was simply identifying the issue with his arm. Kedon Slovis consulted soft tissue experts to deal with any lingering effects of his shoulder and elbow injuries and traveled twice per week to Hermosa Beach last spring to work on his mechanics. At 3DQB, where the likes of Tom Brady, Drew Brees and other top quarterbacks have trained, Slovis focused on proper arm care, on posture, on improving his balance and timing.

"That was the biggest thing for me, getting my mind feeling confident with my body and my arm," Slovis said.

As the confidence returned, so too did the joy he'd felt playing football as a freshman. There were no expectations then as an overlooked three-star recruit thrust unexpectedly into the spotlight. His arm was sore nearly every week — a product of not properly using his lower body — but there was no second-guessing, no overthinking. He was just slinging it.

"He's getting back to those ways where he's just going out there and playing his game, balling out," says Drake London, USC's top receiver.

But Slovis is the first to note how much has changed since his first season. He understands so much more about his arm, about football, about himself. He thinks about Dart and Moss and laughs at how naive he was as a wide-eyed freshman. As dynamic as he was, Slovis knows he's capable of more.

"It's funny looking back, not even to the stuff I did, but certain thought processes I had, how I looked at things," Slovis said. "It's a lot different now."

The expectations are much higher now. The stakes, too. That much is clear from his Instagram account alone, where United and other major brands have already brokered NIL deals with USC's quarterback. It's impossible, too, for Slovis to ignore the conversation about the NFL draft, where some prognosticators have pegged him as a first-round pick.

But none of that matters, Slovis points out, if the upcoming season goes sideways. For now, as a fateful few months loom, he's just happy to be where he's at — having fun playing football.

"That's what made it all the more validating and refreshing, going through all those feelings and adversity and not feeling your best to now, feeling pretty good, the best I've felt in a long time," Slovis said. "It felt like a long journey. I'm just happy to be on the back-end of that."

College Football
Fleck to USC? As rumor mill churns, nothing is imminent
213 views

College Football
Hope has arrived: All aboard the Bruins bandwagon
194 views