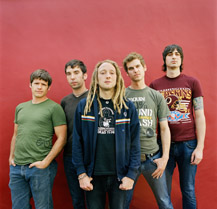 Those who are truly able to make an impact are those who pour all their emotions into their craft. Thomas Barnett, the dreadlocked lead singer of the hardcore punk band Strike Anywhere, could very well be the poster boy for someone who wears his convictions on his sleeve. Though frustrated about the social ills of America, the polite and down-to-earth frontman offers a compassionate sense of hopefulness that's too often missing from music used as a source for social change.

Barnett couldn't do it alone however. His band mates, guitarists Matt Sherwood and Matt Smith, bassist Garth Petrie and drummer Eric Kane all take an equal part in creative process of Strike Anywhere.

“We're not a band that is driven by one person,” Barnett says. “Though the band has changed over the years, our soul is the same and our vision as a band is still intact.”

It was 1999 in Richmond, Va. that the five-piece first came together.

Since its inception, the band has been blending punk and hardcore with intelligent political and social critiques.

While hardcore is often seen as brutal, Strike Anywhere has managed to bind that aggressiveness and fuse it with just the right amount of rock sensibility to create the perfect noise of joyous dissent.

Dead FM , the band's first new material in three years is its proof.

“We really didn't want to rush this album,” Barnett explains. “And in turn, it made the recording process much more fulfilling.”

By slowly honing the songs, the band was able to experiment musically and bring more diversity to the album.

“We've gotten to the point where, we're closer than brothers and beyond friends. We share this bond that is intense and impossible to explain,” Barnett says.

Dead FM sees the band bringing its music to a more vulnerable state.

“America is a mess. It has become nothing but a bunch of clichés and slogans. Money and oil can move so easily across the borders, but people can't,” Barnett explains. “With this album, we really wanted to focus on humanity; Feeding real stories helps bring in the humanity.”

In doing so, Barnett let his own guard down.

“I've always had the fear of being too overexposed. People often think that because you're a singer and up there in front that you want to lay it out on the table, but that's often not the case.”

With the healthy push of his band mates, however, he did decide to open himself up to his fans. The inside pamphlet of Dead FM explains the stories and thoughts behind many of Barnett's lyrics.

“Sedition,” for example, chronicles his grandfather's role in the Manhattan Project while “House Arrest” tells the story about being incarcerated in Japan with his band mates three years ago.

“Punk Rock is all about feeling that sense of community. I'm grateful that I was given that opportunity to share my stories with others and hopefully they will be able to feel a greater connection to the music and still be able to find their own interpretations of it,” Barnett says.

It's the empathy for humankind and wanting to give back to the community that help shape the members of Strike Anywhere that radiates through Dead FM .

With the dozens of political bands on the scene today, Barnett explains, “We've always felt that we only want to continue doing this as long as we are still relevant.”

Trust me, you're as relevant as ever.

Dead FM is currently available. Strike Anywhere will perform Oct. 15 at the Knitting Factory, in Hollywood and Oct. 16 at the Glass House, in Pomona. For more information, visit www.strikeanywhere.org .